In 2002 the € EURO replaced the Belgian franc as the country’s official currency, 1 euro equalling 40.3399 francs. The very name of the new currency was even first proposed by a Belgian and the € symbol was designed by a Belgian, Alain Billiet. Between 1926 and 1946 Belgium also used the “Belga” as currency (five francs to a Belga), but the name was never popular and quickly went out of use.

There are no limits on the amount of foreign currency you can take in our out of Belgium. You can exchange your pounds or dollars at bureaux de changes, banks, large railway stations and airports. However, remember that you’ll usually get the best exchange rates at banks.

Are found everywhere, from airports to rail stations and in every commercial street and city centre in the country. Almost every bank also has machines inside which can be used even if you are not a client, all cards are accepted. These cash points are open to the public well after the banks have closed. When these eventually close down for the night at around 10pm most banks have a machine outside that is accessible 24/7.

Although most major credit cards are widely accepted, Belgium has nothing like the credit card use of somewhere like the USA. Nevertheless all major shops and most hotels and restaurants will happily accept them. Be warned that not all cash machines take credit cards.

Belgium has plenty of banks so you’ll never be too far from one. If you find yourself short of cash, the general rule - no matter how small the town - is that if you can find the market place you won’t be far from a bank. It’s also useful to know that all Belgian post offices offer bank-services too. Banks are open from Monday to Friday between 9am and 4pm and usually close for lunch for an hour or two. They also closed for weekends and on national Holidays, check our Official Holidays-page for more information.

Prices in Belgium always include service and VAT or sales tax. Although there are exceptions (only 6% is charged on taxi fares for instance) the general value added tax rate is 21%. Since January 2010 the VAT rate for restaurant meals has been lowered to 12%.

Tipping is common practice in Belgium and is usually given to reward exceptional service. This is certainly the case in bars, restaurants and hotels as well as for taxis and tour guides. There is no fixed percentage for tipping, but what you give is always appreciated.

Sadly, this only applies to visitors traveling to a final destination outside the E.U. All goods including tobacco, chocolates, spirits and perfumes can be bought tax-free at shops in every airport. Be sure to check the legal allowances on what you can take back home with you. 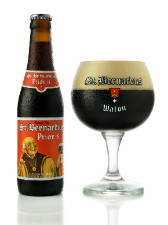 Between 1946 and 1992 the beers of the Sint-Sixtus abbey in Westvleteren were brewed by the St. Bernardus brewery. In 1992 production reverted to the abbey of Westvleteren. Thi... [ more ]