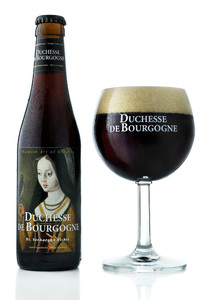 At Verhaeghe-Vichte tradition is more than just a hollow phrase. After all, this brewery has been brewing Flemish red-brown beer for four generations.

For Karl and his brother Peter, the brewer, the story started with Vichtenaar but it is the Duchesse de Bourgogne that has become their flagship beer. It is brewed with deeply roasted malts and aged hops, giving a low bitterness.

Many centuries have gone by but Mary of Burgundy is still held in high regard in the town of Vichte. This Duchess, born in Brussels, was the wife of Maximilian I.

“She granted many rights to citizens and supported the brewers,” Karl Verhaeghe of Brouwerij Verhaeghe-Vichte tells us.

The regional beers that were first produced when the brewery was founded in 1885 are still flowing out of the tanks.

After the main fermentation and cold storage the Duchesse de Bourgogne continues to mature in oak foeders. The tannins from the oak lend the beer its fresh and fruity character.

When poured and served correctly (make sure you use a clean glass!) the beer takes on a lovely ruby-red colour with a head of delicate froth.

The aromas of this beer are done full justice in its elegant, tall-stemmed chalice.

Duchesse de Bourgogne is a superb example of a Flemish red-brown beer, refreshingly sour with a sweet touch that doesn't linger too long.

Its vinous aromas and sharp sourness are tempered by the sweet character of the malt.

Duchesse de Bourgogne works nicely in the kitchen when used in sauces, sabayon and stews. Try it in your own personal "stoofvlees" recipe and don't be shy experimenting as you see fit, that's half of the fun!

The beer also pairs nicely with some selected Belgian cheeses with the natural tartness cutting through the fattiness of the cheese rinsing your palate at the same time.

Bottled Duchesse de Bourgogne can be stored for 24 months. On tap, the beer will keep for 12 months. Always store your bottles upright in a cool, dark and dry place.

Available bottled (25cl, 33cl, 75cl) and on tap (15l, 20l and 30l). The brewery has roots stretching over more then a century and exports successfully.

This is a popular beer so you should be able to find Duchesse de Bourgogne in Belgian (or craft beer) bars and specialised off licences both in and outside of Belgium. 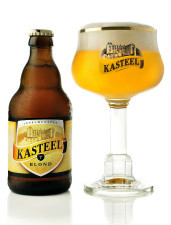 The unique and distinguished “Kasteel” glass with its gold rim is familiar to many beer lovers.... [ more ]