How many Belgian beers are there? Are we talking about 1,500, 2,000… or even more? But what’s a bottle or two between friends? Whatever the final figure, little Belgium is the source of 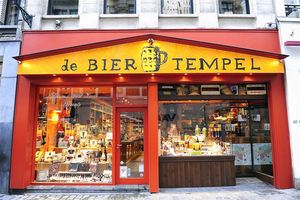 Brussels' beer shop
© BeerTourism.com
an ocean of beer that is about to flood the world.

Importers trawl the market in search of the styles and tastes that are lacking from their portfolio.

And true beer lovers won’t rest until they have tasted every one they can lay their hands on.

Some are on an endless quest for that one ‘very limited edition’ brew, badgering even their friends to find out where they can obtain the one special bottle that they have searched high and low for. The hunt for liquid gold is a never-ending pleasure - unless the beer truly isn’t available anywhere and turns out to be a myth.

When visiting Belgium there are many ways and channels to obtain your favourite beer...

If you are trying to locate a hard-to-track-down beer, we recommend a trip to the brewery store, where all those brewery tours invariably deliver their guests. If you happen to find yourself 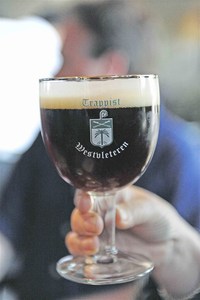 Westvleteren 12
© BeerTourism.com
in the 'In De Vrede' café as a guest of the Abbey of Sint-Sixtus in Westvleteren, you may be able to scoop up a few bottles of this iconic Trappist beer.

If your ambition extends to taking away an entire crate, things become rather more complicated. To buy a crate, you must ring the abbey’s dedicated beer line, give your car’s license plate number, and only then will you be told when you can apply to purchase two crates at the most.

If you are clever, you turn this restriction into an opportunity. On the black market, as well as on eBay, Westvleteren 12 is worth almost its weight in gold. Admittedly, demand for ‘the world’s best beer’ has exceeded supply to an extent that is unlikely to be replicated in the case of any other beer.

For the hunters of most beers though, the brewery shop remains a valid option. If the brewery is also a tourist attraction – examples include Orval Abbey and the abbey of Val-Dieu, De Halve Maan in Bruges or Cantillon in Brussels – you will find a well-stocked store, perhaps with lots of additional merchandise.

However, most brewery stores are wary of commercial excesses. There are many breweries without a ‘proper’ shop. You can usually buy their beer. But only if you ask.

For beer lovers who want to top up their stock, a beer festival is well worth visiting. Beer festivals, both large and small, are held all over Belgium. The three largest ones are, the Brussels Beer Weekend 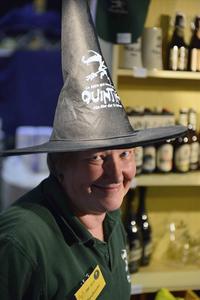 Zythos Beer Festival
© BeerTourism.com
held over the first weekend in September; the BAB Bierfestival in Bruges in February; and Zythos, which takes place in Leuven at the end of April.

The Brussels Beer Weekend was initiated by the National Federation of Belgian Brewers. It is primarily attended by established medium-sized and large breweries.

The festivals in Bruges and Leuven are targeted more at knowledgeable beer lovers. They flock to these cities in droves to taste and purchase the latest creations from microbrewers.

If these don’t appeal or can’t be reached, there are many local beer festivals, including Modeste in Antwerp in early October; Brassigaume in Marbehan near Arlon in mid-October; and the Namur beer festival held early each July.

The list is endless. In recent years many places have had ambitions to claim the title ‘Beer Capital of Belgium’ - it is an honor that won’t be awarded to a city that doesn’t stage at least one beer festival.

Beer has not always been given the praise that it is due, even in Belgium. Beer stores that aim to cater to the customer’s every need are still few and far between. However, the beer crowd knows exactly where 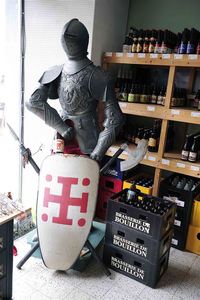 Beer shop in Bouillon
© BeerTourism.com
to find these oases. And they are quite prepared to travel to such a discovery, even though it may be located well off the beaten track.

You will find plenty of beer stores in tourist centers such as Brussels and Bruges. But, as is the case with chocolate stores, the risk of falling into a tourist trap is never far away.

If the shop is crammed with souvenirs and there happen to be a few beers on the shelf, you can’t expect quality, knowledgeable service. The staff are unlikely to know much about the beer, and there is little chance of being able to taste the beer under optimum conditions.

However, one Bruges mega-store, housed in its historic building, has at least gone to the trouble of displaying its beers in alphabetical order. It is a hallucinatory experience to wander past these endless rows of bottles. Brussels can rightly be proud of a beer store in the vicinity of the Grand Marché where this noble drink is poured in the same way as a quality wine. The owner is a beer enthusiast as well as a beer sommelier; 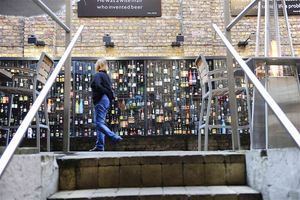 His store, Délices & Caprices, is a mecca for beer lovers. This is where you go to taste a beer that is new to the market, or to be surprised by Pierre’s latest find.

Above all, he listens to the customer, gauges his taste and then suggests a beer: “Have a taste of this one. This batch is now at its prime.”

If you are after an unlimited choice, you should make your way to one of the larger specialist beer stores away from the city centre, such as the independent stores that are part of the Prik & Tik association. It’s a journey that you must make by car, though.

If you are using public transport you don’t want to lug crates of beer around. And if you’re travelling by plane, it’s a complete no-no. So e-commerce is a handy option. Just order the beer of your choice 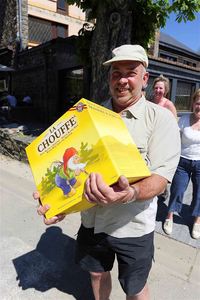 A happy shopper...
© BeerTourism.com
and have it delivered to your home or to a collection point.

Most online shops are increasing their range, they are reliable, and they provide a service that is at least reasonable.

You can also go for the best of each world. Enjoy a tasting at the brewery, at a beer festival, in a beer store, or in a café, and then place your order online. This is also an opportunity to obtain the glass that goes with the beer, the one that you couldn’t cram into your suitcase.

Last but not least there is always the supermarket. Until recently the shelves were reserved for mainstream beers and there was very little for the beer lover to discover. But times are changing.

Regional Products are becoming more popular and the media are paying more attention to specialty beers. This has filtered down, affecting the variety of beers offered by big retailers, who like to be known for stocking a wide range of products. There is still a long way to go, but when you visit a supermarket nowadays you are likely to come across 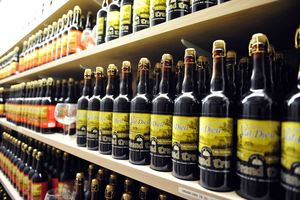 You may even be lucky enough to come across someone who can explain the different beers and recommend the one for you.

We hope it won’t be long before the beer lover is able to attend a beer sampling in his supermarket, just as they can now with wine. Tips for beer pairing and recipe cards are perhaps a step too far at the moment, but who knows?

A number of supermarkets offer their own beers, developed in co-operation with beer sommeliers. These developments don’t feel like empty promotions, and leave you with a sense of taste and quality. In other words, get yourself to the supermarket to replenish your stock, but for something really special you may have to search a little further.

Detailed guide to Belgian brewery visits; from big to micro, city and farm breweries, in Flanders, Wallonia and Brussels.[ more... ]