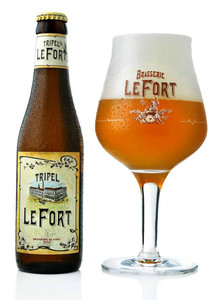 The now defunct Brasserie Le Fort in Kortrijk made a name for itself with its strong beers. Tripel LeFort pays homage to that brewery that closed its doors in 1911, moving its production to the Omer Vander Ghinste brewery in nearby Bellegem.

Part of the Omer Vander Ghinste range, Tripel LeFort is a strong blonde beer, available bottled and on tap. It has been brewed with a new yeast variety, has plenty of body and, with its complex aroma and taste profile, is more than a match for the brown Brasserie LeFort.

The tripel name refers to the higher proportions of raw ingredients used in brewing these beers.

A tripel is a heavy, predominantly blond beer with a strongly malted and/or hop bitter taste.

Modern tripels are fruity and dry with plenty of carbon dioxide bubbles and a lovely bitterness.

The tripel was originally created by Trappist brewers but has become a generic term for strong, blond to amber coloured beers that re-ferment in the bottle.

They are a particularly Belgian style of beer, slightly darker than strong blond beers and with a high alcohol content.

Tripel LeFort is a top-fermented beer that re-ferments in the bottle.

Tripel LeFort has a golden-blond colour in the glass below a snowy white head of froth.

Tripel LeFort is served in an elegant tulip-shaped glass on a tall stem. The logo on the glass is based on a window design at the original Brasserie Le Fort building, which closed over a century ago.

The beer has an amazingly refreshing and fruity aroma with touches of vanilla and cloves.

It has a beautifully mild and full taste of bananas and red apples with impressions of citrus, lime and roses.

It is a balanced and complex beer and the alcohol provides a pleasantly warm glow.

Tripel LeFort makes a delicious pairing with spicy Eastern dishes, with fish recipes such as Dover sole in a creamy sauce or a traditional stew.

The beer can be stored in the bottle for 24 months. On tap it will keep for 12 months.

Whenever possible, store in a dry, cool and dark room.

In Belgium Omer Vander Ghinste has an extensive network of their own cafés and many of their beers can be found on the shelves of supermarket chains nationwide as well. Due to the successful export activities of the brewery and the worldwide success of their flagship beer OMER. Traditional Blond you should be able to find this one outside of Belgium. 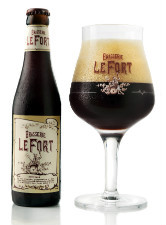 Brasserie LeFort is served in an elegant tulip-shaped glass on a tall stem. The design on the glass was inspired by the motif that forms part of the stained glass window in the for... [ more ]