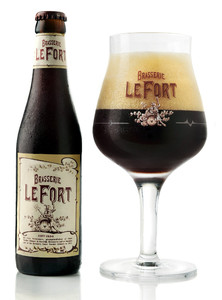 The beer of Brasserie LeFort embodies the revival of a little piece of Belgian brewing history. The name is a reference to the former Kortrijk city brewery. The original LeFort brewery was located on the square (plein in Flemish) that used to be home to a fort designed by the well-known French military architect, Vauban.

The owner of the brewery, Felix Verscheure, left it to his granddaughter Marguerite Vandamme. She married Omer VanderGhinste, known for his eponymous brewery in Bellegem. Brasserie LeFort closed its doors in 1911, when all brewing activity was moved to Bellegem.

A recently developed degustation beer, LeFort springs from the tradition of relatively heavy beers (7%-12% ABV) for which the LeFort Brasserie was well-known. This dark, complex, top-fermented beer is one that re-ferments in the bottle.

Malt is predominant, but there are striking touches of caramel and chocolate provided by the roast malts. The beer also stands out through its fruitiness and zestiness.

Brasserie LeFort is a top-fermented beer that re-ferments in the bottle.

The slightly sparkling Brasserie LeFort shows a clear red-brown in the glass, topped by a delicate head of café crème-coloured froth.

Brasserie LeFort is served in an elegant tulip-shaped glass on a tall stem. The design on the glass was inspired by the motif that forms part of the stained glass window in the former brewery.

The beer has a mild and rounded taste thanks to the use of wheat. The malts provide a slight bitterness and give touches of chocolate and caramel.

The house yeast contributes the fruity impressions, all dark fruits and raisins. This beer has a markedly long finish.

Brasserie Le Fort makes for a great pairing with tuna (sustainably caught, of course!), quickly pan-fried. There is a perfect harmony between the slightly ‘sweet’ umami character of the fish and the caramel notes of the beer.

It is also a perfect companion to a good steak and frites, that Belgian culinary classic. Regardless of our tips, however, remember to be adventurous, and don't hold back from experimenting with this beer in the kitchen!

If kept in optimal storage conditions, this is a beer that will keep in the bottle for 24 months, and perhaps six months on-tap. It is best stored upright in a dry, cool and dark environment.

Brasserie Le Fort is available in 33cl bottles and in 20 litre barrels. But, as the latest beer to be added to the already wide, and versatile, array of Vander Ghinste beers, "Le Fort" isn't that easy to find yet.

And certainly not as readily plopped in the basket as the number-one flagship beer of the brewery: OMER. Traditional Blond. 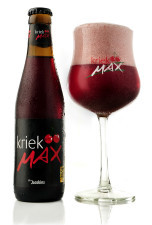 Like all the other Bockor beers, the Kriek Max is served in a proprietary glass designed by the brewery itself. This elegant glass on a thin stem can be purchased during a visit to... [ more ]