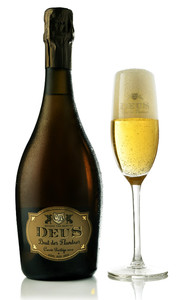 DeuS Brut des Flandres is a unique brew that was introduced to the world in 2002. It is a sparkling, honest and pure beer created with just water, yeast, malt and hops. The carefully selected yeast cultures add a mild taste of ginger. The exquisitely balanced hop bitterness, top quality ingredients and an attention to detail that verges on the obsessional result in a beer that is halfway between beer and bubbles.

The master brewer at Bosteels uses barley as the basis for DeuS. After a first fermentation and maturation the beer is transported to the Champagne region, where it is finished off using the well-known méthode champenoise usually used to produce sparkling wines.

The beer is given ample time to ferment a second time and will then mature for a minimum of 12 months. After this well-deserved rest a sediment will have formed in the bottles, which are stored horizontally. The sediment now has to be propelled towards the neck of the bottle, a process known as remuage.

The bottles are placed in 'pupitres", or stillages, where they are turned around and brought from a horizontal into a vertical position. A turn is made every eight hours and after a week or three the bottles will be standing upright. All the sediment formed during re-fermentation is gathered in the neck of the bottle, which will subsequently be degorged.

A beautifully clear, pale, sparkling beer. This beer forms a lovely, clear and snow-white head which keeps its shape for a long time. However, the beer must be served at the correct temperature for this to happen.

The brewers at Bosteels pay a lot of attention to using the right glasses to complement their beers. The Kwak glass could well be one of the most iconic drinking vessels in Belgium and is famous far beyond the country’s borders. Needless to say, DeuS has its own particular glass, the DeuS flute, resembling a Champagne glass.

A mildly sweet aroma with flowers, a touch of citrus and ripe fruit. The flowery character is perfectly mirrored in a taste that also sees a return of the ripe fruit aromas. Beautiful pearlisation as well.

The aftertaste is of a perfect bitterness with a beautifully dry finish.

It’s an ideal aperitif beer whether in preparation for a slap-up meal or a light lunch. This beer is ideally matched with fresh oysters, the Belgian Ostendaise for example. Recipes with a slightly sour touch also make a perfect pairing.

We would recommend this beer for use as a companion to food rather than an ingredient as its subtle complexity tends to get lost when it is added to recipes.

The beer can be stored for 24 months in the bottle. This beer will not gain from being stored in a cellar for years on end.

Brouwerij Bosteels pay attention to detail and will only introduce this beer to the market when it is perfectly mature.

As this beer is finished using the méthode champenoise it is only available in bottles (75cl). You won’t find it on tap anywhere. Unlike Kwak and Tripel Karmeliet, it isn’t always easy to find in cafés.

However, the better quality off-licences are well stocked with DeuS so locating it will not be a problem. Thanks to Bosteels’ extensive export activities this beer can be found far and wide outside of Belgium.

Tripel Karmeliet
The Carmelites from Dendermonde in East Flanders were brewing a three-grain beer in the 1600s. This information, published in a recent book on local brewing history, happened to come to light after Brouwerij Bosteels (located in B ...
[ read more ]

Pauwel Kwak
In the 18th century there was a very well-known brewer in the Dendermonde area; his name was Pauwel Kwak. He brewed his own beer, which was dark and heavy. He also has had a coaching inn on the road between Mechelen and Gent, wher ...
[ read more ] 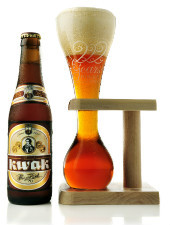 Served in the distinctive Kwak 'Koetsiersglas' with its convex bottom, which sits in a wooden stand. It is very likely the most distinctive beer glass in Belgium. There really is n... [ more ]