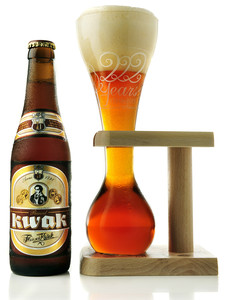 In the 18th century there was a very well-known brewer in the Dendermonde area; his name was Pauwel Kwak. He brewed his own beer, which was dark and heavy. He also has had a coaching inn on the road between Mechelen and Gent, where the mail coaches used to stop for a break.

In those days, the Napoleonic Code ruled that coach drivers were forbidden to drink beer with their passengers and so they were not allowed to leave the coach to quench their thirst. Pauwel Kwak invented an efficient solution to this problem by offering the famous Kwak beer in a special glass that could be fixed to the carriage, so the drivers could also enjoy one.

This story inspired a brewer from nearby Buggenhout and since the 1980s the Pauwel Kwak is brewed by Brouwerij Bosteels, which also produces the popular Tripel Karmeliet and the DeuS Brut des Flandres.

In common with all Bosteels beers, it is brewed with natural basic ingredients: barley malts, mineral water, wheat, hops and white candy sugar.

The Pauwel Kwak has a deep amber colour. When poured correctly it forms a lovely firm head.

Served in the distinctive Kwak 'Koetsiersglas' with its convex bottom, which sits in a wooden stand. It is very likely the most distinctive beer glass in Belgium. There really is no alternative to this glass.

Pauwel Kwak has earthy aromas, a malty character with touches of liquorice, a nougat-like robustness and a warm finish not unlike caramelised banana. Yeast and red fruits are the strongest aromas, but you will also find a few herbs.

The caramel is quite noticeable, together with the herbs and orange zest. The aftertaste is slightly bitter and herbal.

This beer is a worthy dining partner and also has its uses in the kitchen. It will make a perfect pairing with, for example, pigeon or pickles. You can have both at the same time thanks to the Kwak’s fine caramel.

This complements the zesty taste of the pickles and softens it slightly so it will not overpower the pigeon.

Just like the other beers in the Bosteels range, the bottle states a storage life of two years. We strongly recommend that you follow this guideline. The taste of this beer will not improve with longer storage, in fact it could deteriorate.

The Pauwel Kwak, like the Tripel Karmeliet, is available in bottles (33cl, 75cl) and on tap (30 l barrels). Like the Karmeliet, this beer is widely distributed throughout Belgium.

It is easy to find in cafés, specialised off-licences and supermarkets. In common with the other Bosteels beers, Pauwel Kwak is exported far and wide so can be found outside Belgium’s borders.

DeuS Brut des Flandres
DeuS Brut des Flandres is a unique brew that was introduced to the world in 2002. It is a sparkling, honest and pure beer created with just water, yeast, malt and hops. The carefully selected yeast cultures add a mild taste of gin ...
[ read more ]

Tripel Karmeliet
The Carmelites from Dendermonde in East Flanders were brewing a three-grain beer in the 1600s. This information, published in a recent book on local brewing history, happened to come to light after Brouwerij Bosteels (located in B ...
[ read more ] 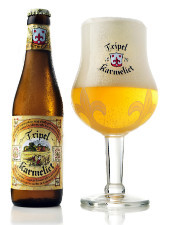 Tripel Karmeliet is served in one of the most elegant beer glasses to be found in Belgium. The glass was designed by Antoine Bosteels, one of the managers of the brewery, and is de... [ more ]