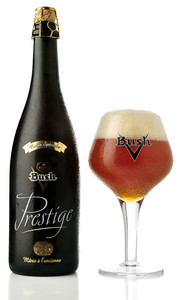 The Bush Prestige (Scaldis Prestige) certainly lives up to its name – as it is a rather prestigious brew. Much of that mark of distinction has been acquired from the vessels it matures in. Rather than sitting in stainless steel tanks (as the Bush Ambrée does), it spends six months having its complexity nurtured in oak barrels. The result has a powerful taste profile, which, combined with its rich aromas, exclusive bottle and limited distribution, mark out the Prestige as something of an exceptional beer.

The underlying liquor of the Prestige is the Dubuisson mainstay, the Bush Ambrée. This very strong amber beer contains only hops, natural sugars, water drawn from the well underneath the brewery, and (of course) the brewery’s extraordinary house yeast. This is famed for its ability to remain active even at high volumes of alcohol, helping build the Bush range's double-digit alcohol counts.

But because the active house yeast feeds on a higher density of malt, and also undergoes a warm in-bottle ferment, the Prestige racks up an even higher alcohol by volume (ABV) – 13.0%. That makes the Bush Prestige among the strongest straight-brewed beers in Belgium.

After the primary ferment, the Bush Prestige is matured for six months in oak barrels. Then a limited quantity of sugar and yeast is added during bottling, to promote the in-bottle re-fermentation in the warm room. The re-fermentation gives the beer a naturally cloudy veil and an exceptionally high alcohol volume of 13%.

Bush Prestige is amber in colour. The naturally cloudy veil is a striking feature of this beer.

The Bush Prestige is slightly cloudy owing to the re-fermentation in the bottle. When tasting, noticed first are the touches of wood, whisky and sherry. As it is matured in those oak barrels, the Bush Prestige absorbs and develops a unique suite of tannins – flavours not normally found in beers.

The aromas very much remind you of whisky and other distillery products that have matured on oak. The overall taste is powerful and rounded, with the fine feel and finish of the source Bush Ambrée – just with that little bit more. 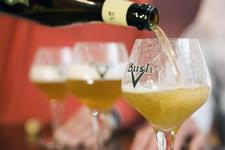 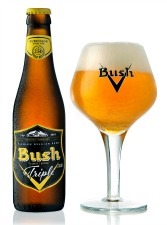 Bush Blonde Triple is served in the hand-blown, artisanally produced Bush chalice with the typical crackled (or 'craquelé') finish. ... [ more ]