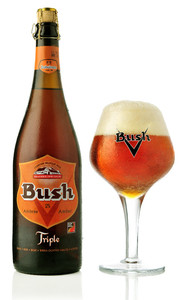 This is another of Dubuisson's anniversary beers. In order to celebrate the 75th anniversary of the Bush brand name, the brewery launched this beer, the Bush Ambrée Triple (Scaldis Ambrée Triple), in 2008. This is a re-fermented Bush Ambrée, marketed in large 75 cl bottles. These have a luxurious and exclusive look – thanks to their elegant, screen-printed bottles – and are suitably topped off with a champagne cork.

The ‘amber’ in its name is a reference to the bright-brown tinge provided by the more highly-roasted caramel malt used for the Ambrée. Such amber beers often deliver intense touches of herbs or caramel. And as a tripel, you expect (and get) a strong, high-fermentation beer that benefits fully from re-fermenting in the bottle. A triple generally has a taste characterised by intensely well-balanced light malts and/or hop bitters. Also typical is a relatively high alcohol content, and high levels of carbonation.

Bush Ambrée Triple definitely meets – and exceeds – the expectation for being alcohol-heavy, hitting the 12% ABV of its Bush Ambrée precursor. Production time is four to six weeks, with the re-fermentation forming a natural veil within the bottle. The beer itself is very well rounded and mild, nicely accentuating the aromas and tastes of the Bush Ambrée.

The Bush Ambrée Triple is a filtered high-fermentation beer that re-ferments in the bottle.

The beer owes its bright amber colour to the caramel malts used in its basis beer.

Bush Ambrée Triple is served in the hand-blown, artisanally produced Bush chalice, with its characteristic cracked glazing, or 'craquelé'.

As with its precursor, Bush Ambrée Triple has a delightful bitter-sweet taste and consistency, thanks to the careful balance of caramel malt and hops. Roasted nut aromas are still in there, something of a special characteristic of this beer, along with its distinctive yeasty fruitiness. The re-fermentation process gives the beer a natural cloudiness, making it tender and mild in the mouth.

Bush Ambrée Triple is emminently suitable for use in the kitchen. Thanks to its bitterness, the beer is great for adding to cooking juices, or the marinating of both red meats and white (poultry). You may have to add a pinch of sugar to adjust for the bitterness.

A great tip is to add a dash of Bush Ambrée Triple to dark chocolate when melting it. Bush Ambrée Triple is a great partner for chicken, most meat dishes, game or foie gras and oily fish like eel. Also highly recommended in combination with a strong (blue) cheese or a sheep’s cheese.

Will keep for a minimum of 24 months up to a maximum of 36 months.

Bush Ambrée Triple is only available in large bottles (75 cl). 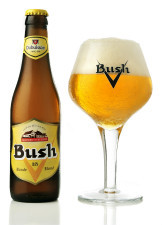