Home › Blog › On the beer trail in Mons with Dubuisson 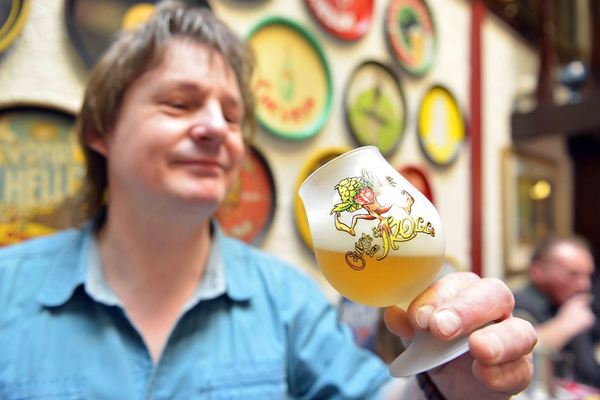 
MONS - As joint European Capital of Culture for 2015, Mons is showing its best face to the world this year. This is the place where Vincent Van Gogh swapped the life of a preacher for that of a painter. 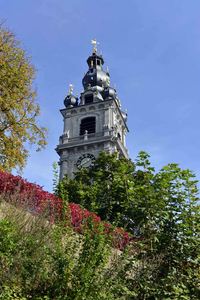 And the city, situated amongst the coal mines of the Borinage, has managed to preserve its historic character while introducing innovations.

Alongside the high-tech railway station designed by Spanish neofuturist architect Calatrava, and a brand new conference centre are the baroque belfry and the ancient Doudou festival – an annual battle to defeat a dragon – which are both listed by UNESCO for their contribution to world heritage.

Certainly if you happen to be in or around Mons at the beginning of June "Le Doudou" or Ducasse de Mons is a not-to-be-missed event. Harking back to the 14th century this colourful feast attracts thousands of visitors to Mons every year.

Today however, we are here on the trail of beer... On a fine spring day, the terraces on the central square are crowded. The gothic town hall, dating back to the times of the Dukes of Burgundy, sparkles in the sunshine. I take a chance and follow a local, pausing to stroke the head of the 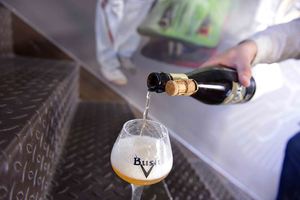 Café A La Mer
© BeerTourism.com
bronze monkey on the façade of the town hall.

I soon find myself in Café A La Mer, a beacon in this sea of terraces. A regular enjoys his Bush Triple.

The fresco beside him brings to life the spectacular “dragon rodeo” that each year sends shockwaves through the crowds that throng the square outside.

I have watched them pulling the hairs out of the dragon’s tail for good luck.

Around the corner, AmBushadeur La Lorgnette looks rather like a night club. Here they serve you a Bush Ambrée straight from the tap.

You can also order a Pêche Mel Bush beer cocktail, flambéed, for two, three or more people. It’s a convivial glass to share, once the flames have died down. 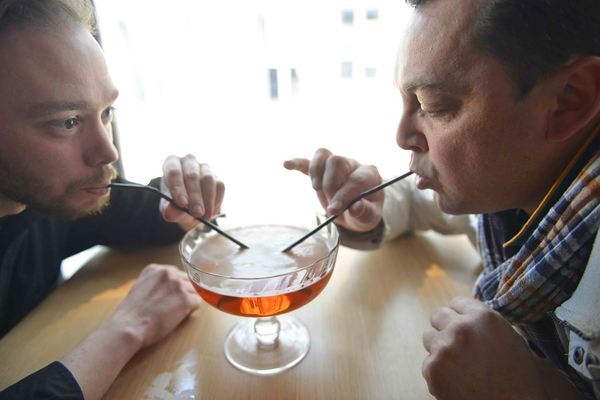 A small, winding road takes me to the Parc du Château, where the gothic belfry with its baroque clock tower rises high above the city. The view amply rewards the effort. 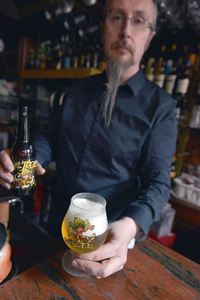 The nearby church of Saint Waltrude also impresses, with its 16th-century stained-glass windows, Renaissance sculptures, and its unique church treasure, the relics of Saint Waltrude and the historic Car d’Or carriage used to transport them in their annual procession.

The entire city is heaving on that day. The ‘golden’ carriage has to be pulled in one go, urged on by the cheering crowds, to the top of the steep road that leads to the church to ensure a year of good fortune.

Today, in contrast, the Excelsior café at the central square is a haven of quiet. In this landmark establishment you can enjoy a Belgian specialty beer in style.

A regular, never venturing far from the bar, knows exactly what he wants. He gestures and a Cuvée des Trolls makes its way towards him.

My next stop, Le Sherlock, promises a whodunit. This café has a very British look, with cask ale being pumped by hand. The famous detective, wearing his deerstalker hat and with his ubiquitous pipe in hand, gives me an enquiring gaze from the wall at the back. “Jean Dehan, the opera singer, painted the mural,” café manager Pascal Houssin tells me.

Pascal seems clouded in mystery too, or am I just dreaming? In no time at all, he conjures up a Cuvée des Trolls and the illusion is working - I find myself in a train carriage travelling through the London of Sherlock Holmes. 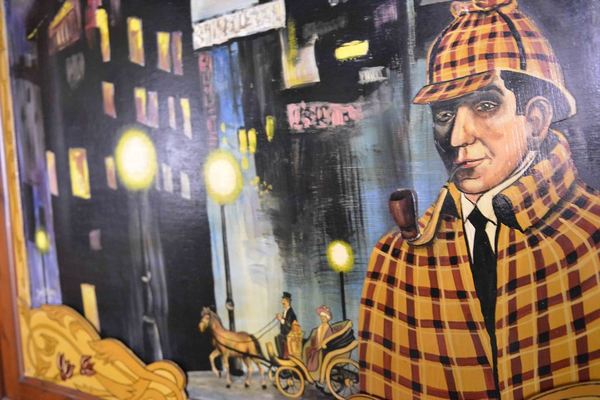 La Pompe Benoît, a local café with many loyal customers, dates back to the 1930s. This is one of the oldest cafés in the city, one of those places where everyone feels at home immediately. 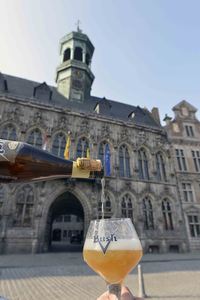 One for the road...
© BeerTourism.com

On its walls, a display of artefacts celebrates Belgian beer history. Café manager Eric Wegnez has a weakness for vintage serving trays and adds to his collection all the time.

I admire a kaleidoscope of faded colours and logos in which I recognise many beer brands, both past and current.

“I have 180 trays on display. Most of them with their original enamel glaze,” Eric tells me. “Where do I find them? Mainly at flea markets and through friends and acquaintances."

"But it is getting harder to collect them. The market for these collector’s items is open and my hobby is becoming ever more expensive.”

“Waiter, I’ll have a Bush please!” A customer places his order. It goes without saying that it has to be an Ambrée. A good café manager knows what his regulars want.

After an enjoyable day experiencing Mons' liquid culture it is time to start heading back to the station for a long but safe trip home, but not before we open a last bottle to celebrate this year's European cultural capital...

This is a venerable brew, which has recently marked its 80th anniversary. 1933 was the year that the Bush Ambrée (Scaldis Ambrée) was first introduced, under the name of Bush Beer.... [ more ]