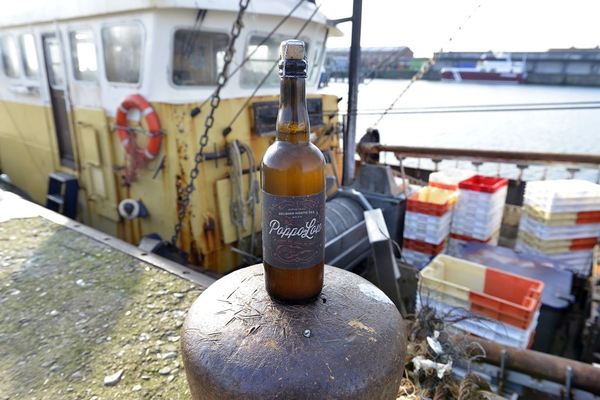 
OSTEND/OOSTENDE - We witnessed it with our own eyes. There was more than just one solitary message in a bottle washed up on Ostend beach. Far more than that... an entire armada of bottles came ashore, 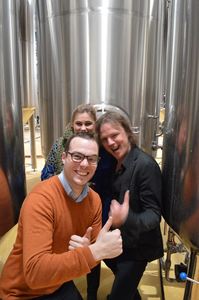 Bart, Vanessa & Glenn
© BeerTourism.com
all bearing the mysterious name, ‘PoppoLou’, in elegant handwriting that had been only slightly faded by the sea.

After we had rinsed and uncorked one of these bottles, we could smell the aroma of the North Sea. But then, to our surprise we discovered that this bottle did not in fact contain North Sea water.

Rather, we were delighted to find a deliciously fresh blond beer hidden below its cork.

This is where the legend stops and reality takes over.

So, where does this scrumptious Belgian coast beer really come from? The idea for PoppoLou sprouted from the creative brain of Glenn Rotsaert, the owner Café Manuscript in Ostend.

“I had wanted to create my own beer for quite some time”, he tells us. “To brew it myself didn't seem a viable option, so I got in touch with brewer Bart Durlet. Straight away he was keen on the idea. I explained that ‘my’ beer should be 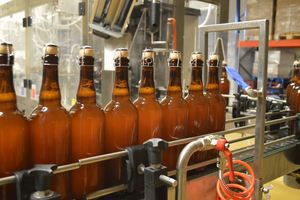 Freshly bottled...
© BeerTourism.com
a North Sea beer with a hint of saltiness. Initially we wanted to use dried, pale seaweed from the Irish Sea.

Unfortunately, that quickly proved to be a far too expensive procedure.

After many tastings of this new beer, Bart was finally convinced that he had found the right taste using a combination of brewing salts. I agreed with him on the spot.”

This is an unpasteurised, unfiltered and top-fermented beer with an alcohol volume of 6% (and re-fermentation in the bottle) hit the mark almost straight away. “If you taste a PoppoLou for the first time, first of all you will find it a very refreshing speciality beer. It’s a thirst-quencher with plenty of taste,” Glenn explains. 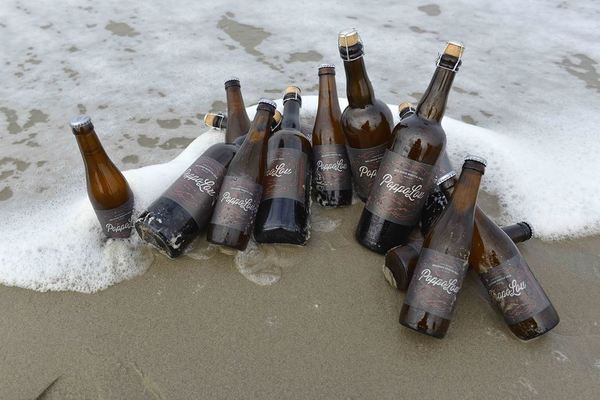 Glenn initially wanted to limit PoppoLou’s distribution to just his own Café Manuscript in Ostend. However, word about this new, delicious North Sea beer spread like wildfire, even on this permanently damp coast. 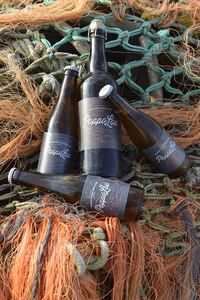 Catch of the day
© BeerTourism.com

“People often asked us where they could buy PoppoLou in bottles”, Glen says. “So, not long afterwards it was launched in large 75cl bottles at a local off-licence and, what’s more, Horeca Totaal now also sells it. And we have a growing demand from restaurants and cafés, not only on the seaside but also further away in the region.”

This beer’s success is due, first of all, to its quality ingredients, including Cascade and Magnum hops.

“They congratulated me on the PoppoLou. They found it hard to slot this beer into an existing beer style but they all agreed that they liked it.”

In the meantime, the customers of Café Manuscript are used to ‘their’ PoppoLou. When one batch is gone, the next delivery is eagerly awaited. “The Manuscript would not be the same without the PoppoLou. It has become part of the furniture,” according to Glenn.

The beer is now available on tap and in large (75cl) and small (33cl) bottles. The market is growing organically: not too fast, to allow the brewer to expand gradually and supply all his customers on time. 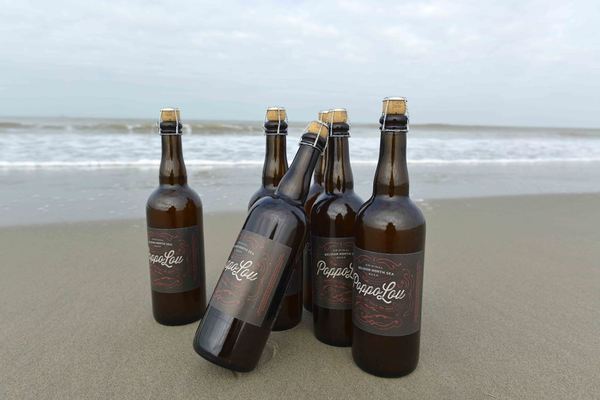 “The PoppoLou now has a life of its own,” smiles Vanessa, Glenn’s business as well as life partner. “I’ll have you know that you can now find a ‘sabayon with PoppoLou’ on the menu in an Ostend 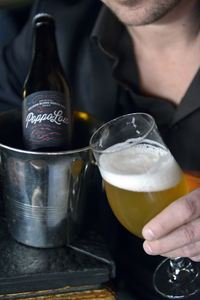 Served with style
© BeerTourism.com
restaurant as well as a ‘cod steak with PoppoLou’. Who would have thought?”

Yes, this beer, thanks to its salty touch, makes a great pairing with fish and crustaceans. It’s everything you could hope for from a genuine North Sea beer.

Try mussels with PoppoLou – two local delicacies that are just made for each other.

Regulars at Café Manuscript don’t want to be without their new, established favourite. “What would you like?” Glenn asks. “Well, of course, a PoppoLou, what else?” comes the reply.

And how does the next generation feel about it? Well Glenn’s children, Poppo and Lou, are both happy and proud to see their names so prominently displayed on the label.

“They can’t wait to taste the beer when they are old enough, but that is still some years in the future,” Glenn laughs while pouring me a glass. “The sea air makes you thirsty,” as they say around here.