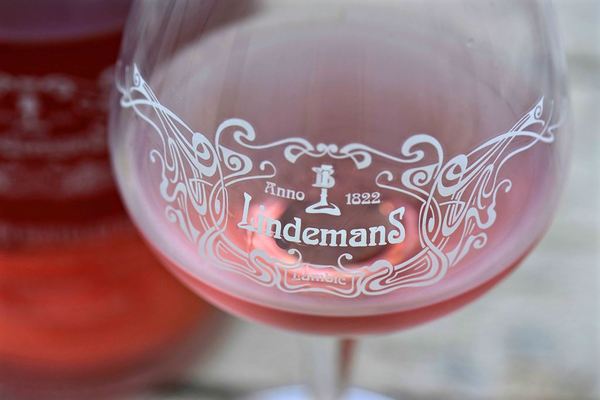 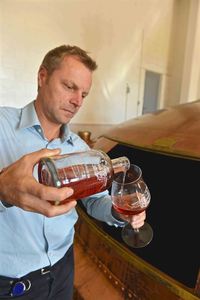 Thus, two regional products melt into a unique new drink: the traditional oude kriek produced with spontaneously fermented lambic from the Pajottenland region near Brussels is combined with artisanally distilled gin from the nearby city of Aalst.

Two gins are on offer, one clear and one red. The colourless gin is made with 15 different herbs and a distillate of Oude Lindemans Kriek Cuvée René, a beer that is steeped in tradition.

Patrick Van Schandevijl, who stokes up the kettles at De Moor, elaborates: “The gin was distilled with pure grain alcohol. It has a delicate aroma of krieken cherries with a touch of almond coming from the cherry stones.”

Patrick recommends trying the gin on its own before adding tonic water or using it in a cocktail. Chilling it will kill some of its subtle aromas and flavours he warns. This is a refined gin that can stand alone in the opinion of the distiller who has poured his heart and soul into producing the drink.

If, however, you do want to mix it, you could do worse than take inspiration from cocktail expert Manuel Wouters from the well-known Antwerp cocktail bar Sip’s. His suggestion for this clear gin is to pair it with a simple tonic water, lots of ice and a grapefruit garnish. 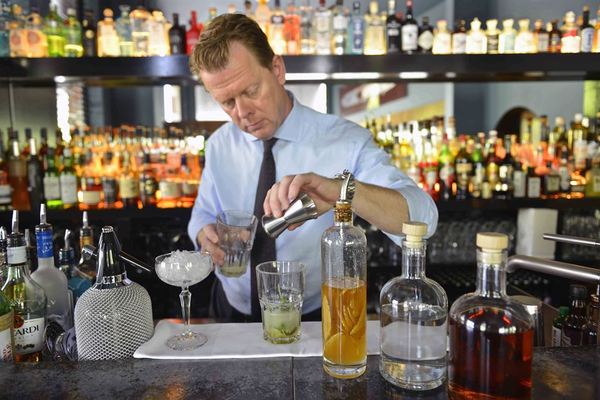 Manuel Wouters mixing it up at Sip's with Lindemans Premium Distilled Gins
© BeerTourism.com

Two Trades Into One

Just like its clear brother, the red gin is distilled on a base of Lindemans Oude Kriek Cuvée René. Its beautiful light-red colour is achieved through the addition of fresh krieken juice. 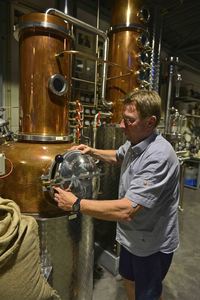 The fresh, subtle aromas of citrus precede a strong citrusy taste in the mouth.

The judicious addition of herbs has produced a balanced, mild gin with the taste of the krieken cherries coming through in the subtle finish.

We highly recommend the red gin, either on its own or paired with neutral-tasting tonic water. In a cocktail it mixes well with a prosecco, for example.

Oude Kriek, brewed from a lambic base, is typical of the area surrounding Brussels, the Pajottenland in particular. The Lindemans family brewery has been plying its trade here since 1822.

The area is home to an exceptional microflora, the so-called ‘wild yeasts’ of the Brettanomyces family; a traditional lambic starts to ferment spontaneously when it comes into contact with these bacteria in the air.

The De Moor distillery is also committed to traditional artisanal production methods. Their entire production of gin and grain jenever is done in-house, from the grain to the glass. 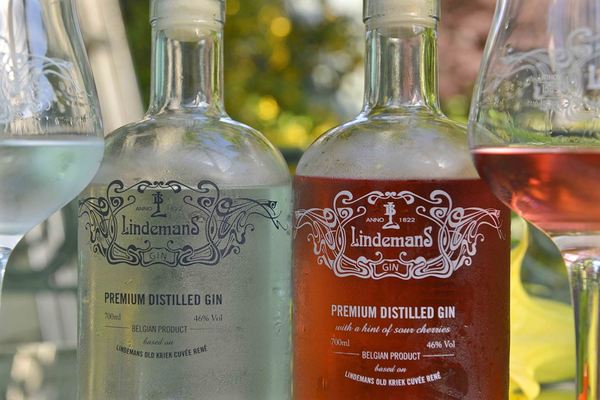 The new gins on the block...
© BeerTourism.com

It took Lindemans & De Moor a year to get these two new gins perfected to their satisfaction and ready to introduce to the world. Patrick Van Schandevijl has already worked with beer distillates – eau de bière - 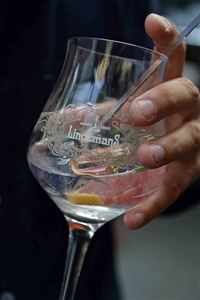 On the rocks...
© BeerTourism.com
at the request of various brewers.

“You can draw many parallels between our world and that of beer,” he says. “You are working with the same basic ingredients, in this case, a beer mash without hops.”

The gin that is popular around the world today has its roots in the Low Countries, particularly in the area that is now Belgium.

English soldiers discovered our local grain jenever when they were helping to fight the Spanish occupation in the 16th century.

They adopted the habit of having a little nip of jenever before going into battle to strengthen their resolve, in other words, to lend them some Dutch courage.

When a mini ice age arrived in the second half of the 16th century, the authorities decreed that grain could only be used to make bread.

Many out-of-work distillers emigrated, taking their skills with them to destinations including England. However, Belgian grain jenever was not to the taste of the English. 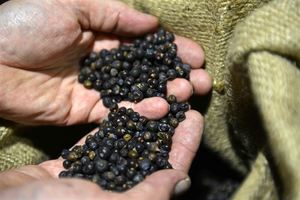 The solution was to gradually increase the dosage of some of the herbs in the drink.

And this is how gin was born, with its aromas of juniper berries, coriander, orange peel, cinnamon and a range of other herbs that were first used in the production of the classic grain jenever (genever).

The first gin made on a base of authentic kriek lambic would not arrive until many centuries later; moreover, this is the first gin ever to be crafted from a Belgian beer distillate...

If you would like to taste the Lindemans Premium Distilled Gins just book a visit to Brouwerij Lindemans and experience this truly unique product first-hand.