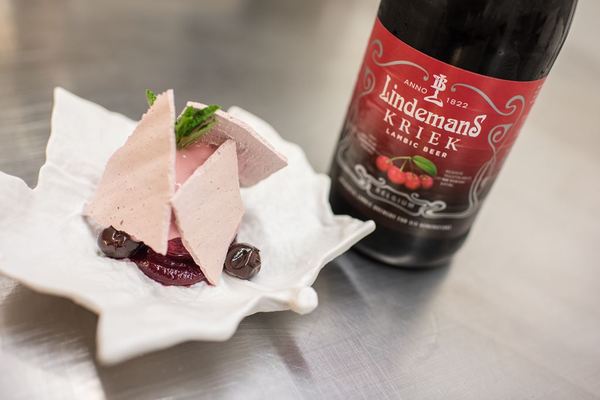 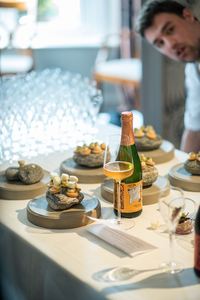 They unleashed their creative genius in the company of hosts Jean-Baptiste and Christophe Thomaes of Le Château du Mylord in Ellezelles.

Each chef presented three recipes with varying degrees of sophistication.

These Lindemans Lampas were tasted by around one hundred invited guests.

Dirk Lindemans introduced the beers: “Our fruit beers are popular with a wide audience."

"The traditional lambic beers of Oude Gueuze Cuvée René and Oude Kriek Cuvée René call for taste buds that are slightly more educated. These sour beers are very similar to 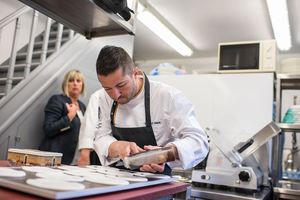 Behind the scenes...
© Rob Mitchell
wine; as the way they ferment, mature and develop in taste is almost the same."

"After half a year the beers gain in complexity and, thanks to the slow re-fermentation in the bottle, they continue to mature for years to come."

"We have recently gone one step further: we are exploring the boundaries of taste with our new Botanical Lambics range that combines lambic beers with herbs."

"For instance, we have worked with Danish beer architect Mikkeller to create the Lindemans SpontanBasil, a new lambic made with basil, and the BlossomGueuze, a gueuze that is enriched with elderflower blossoms. Complex beers such these are great to pair with a meal.” 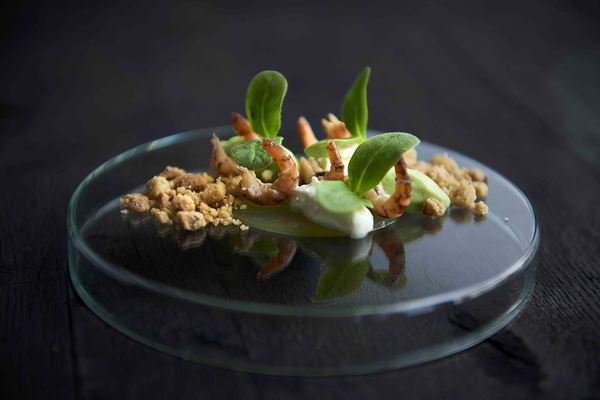 Lode De Roover is betting on sweet and sour and is using Lindemans Oude Gueuze Cuvée René. The beer’s sourness is tempered by the salt in the mini-waffles of seaweed with a 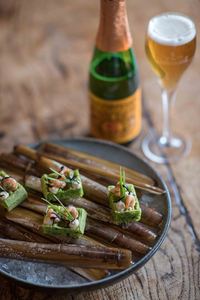 Corn bread is served with the Lindemans Faro, a one-year-old lambic with added candi sugar. The corn bread is finished with a cream of avocado and lemon confit.

The mild sweetness of the corn forms a successful marriage with the slightly sour, rounded taste of the avocado cream that is refreshed by the lemon confit.

Finally, the Lindemans Framboise is served with a cannelloni of filo pastry filled with goose liver cream and a hint of beetroot powder.

Dimitri Marit is presenting a steak tartare with parmesan, basil, Melba toast and olive oil to complement the Lindemans SpontanBasil. The basil is contained in the bubble that bursts right on top of the steak tartare.

The Lindemans Apple is paired with grey shrimp in an apple jelly, with timut pepper with its citrusy touch, horseradish sauce and a guacamole made with avocado. The Lindemans Cassis is complemented by a creation with an extensive taste palate: oxtail with mousseline of carrot and ginger. 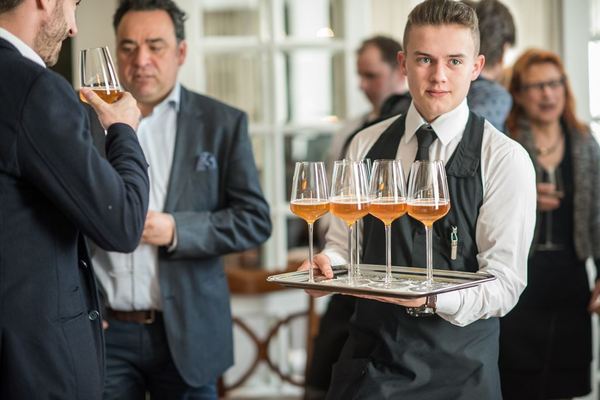 Christophe Thomaes comes up with a ‘variation of cherry with an espuma of Lindemans Kriek’. Its aromas and flavours marry well - there is just a hint of bitterness in the aftertaste. 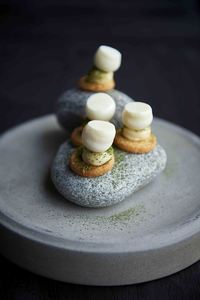 Jean-Baptiste Thomaes has created a ‘tartare of langoustine’ to pair with a Lindemans SpontanBasil. The basil in the tartare provides a refreshing touch; a measure of sourness comes from the leek and green apple with a tinge of chive sharpness.

To go with a Lindemans Faro the chef suggests caramelised pork pluma with a miso of sweet syrup, sour vinegar and salty soy sauce.

The taste is reinforced by the slightly fried, salty oyster. The sauce is an emulsion of oyster jus, white wine and gin.

The Lindemans Oude Gueuze Cuvée René has inspired Sam Van Houcke to create a meringue of hard goat’s cheese, flavoured with aniseed, dill and tarragon. The freshly sour beer (lactic acid) is a beautiful complement to the sour and salt from the cheese.

With the Lindemans Oude Kriek Cuvée René the emphasis is on fruit and sweet and sour. The fried goose liver, glazed afterwards with birch syrup and finished with a sprinkling of hazelnuts, 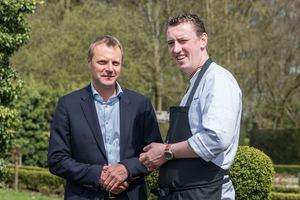 The sweet and sour taste of the beer, the rhubarb and the vinegar combine with the fatty goose liver to create a complete taste palette.

The chef uses it to caramelise grilled Brasvar pork before adding zesty Savora mustard. The sourness and zestiness reinforce one another. And thanks to the grilling, hints of smokiness provide the finishing touch. 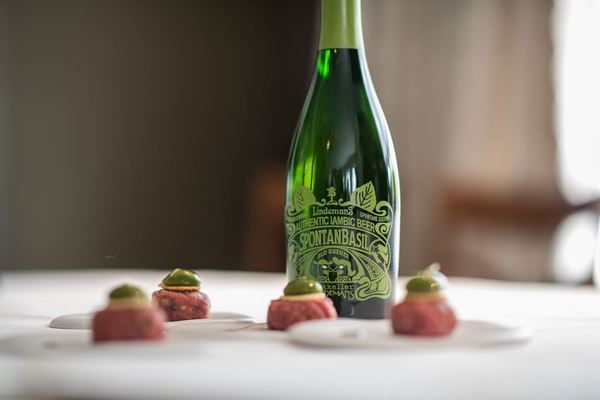 Emphasis Where it Belongs

To go with the Lindemans Framboise, Pascal Peters has conjured up a classic ‘stoverij’ or stew, of rabbit in a sauce made with the beer, a foam of asparagus to add bitterness, beer vinegar to add a 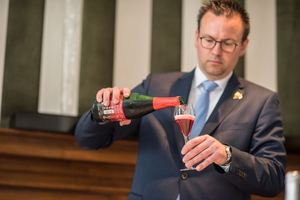 Lindemans Kriek
© Rob Mitchell
sour touch and mild vanilla oil. The beer is quite sweet but this is compensated by bitter and sour flavours.

The Lindemans BlossomGueuze with elderflower is paired with a cream and croquant of mature, zesty hard sheep’s cheese matured on hay, with onions and cherry tomatoes marinated in the beer.

The freshly sour beer breaks down the fatty, slightly salty cheese. Lindemans Kriek enhances a mousse of chicken livers and red beetroot with goose liver and a cherry coulis and a cream of pine nut kernels.

“I have prepared focaccia bread with the beer. The pine nut cream adds a hint of bitter,” Pascal explains. “In this way I tone down the sweet taste of the beer. The freshly sour touch, inherent in lambic beers, cuts down the fattiness of the goose liver.”

All these recipes can be found in the Lindemans Lampas book.

Order your Copy of Lampas

Contact the brewery directly to order your copy of Lampas (available in Dutch, English and French - €19,95)