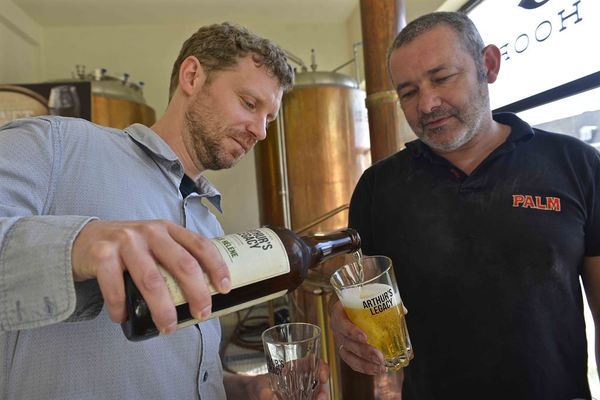 
STEENHUFFEL - In the early hours the spring sunshine colours the copper kettles of the De Hoorn microbrewery. The early bird catches the malt. Even now there is a busy to and fro at the brewery. 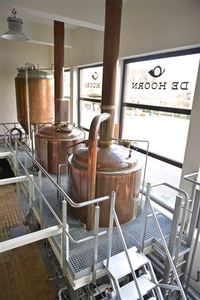 Fons Verheyden, brewer for Palm Belgian Craft Brewers, the group of which the De Hoorn brewery is a part, unloads sacks of malt.

“We make sure that our malt is ground coarsely enough so that the bostel [as the post-brewing malt waste is known] can form a filtration bed,” he explains.

Fons’ colleague Jan De Cock has also turned up early. Soon, a Bruges triple called Prestige will be flowing from the kettle.

The test brew will find its way to several Bruges cafés.

“A single brew from the main brewery contains 45,000 litres,” Jan tells us.

“Here we brew in very small batches of 1,000 litres. Ideal for experimenting with ingredients or crafting our test brews.” 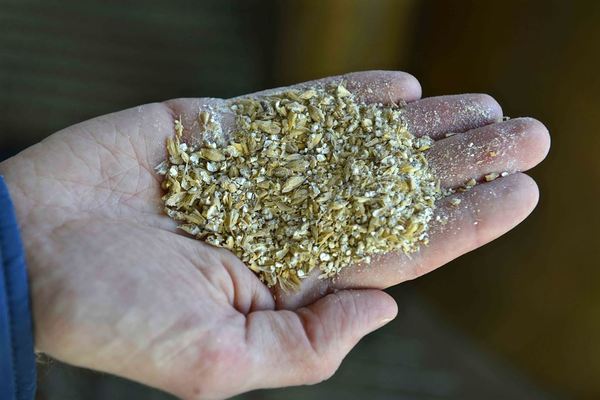 Palm Belgian Craft Brewers has appointed four ingredients masters who contribute to the development of new beers. Depending on the type of beer, one of the four masters will take charge. 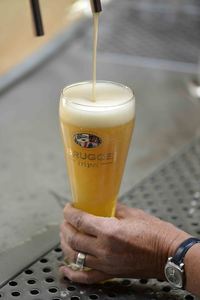 Each master specialises respectively in herbs and spices, fruit, hop or wood. Today it is the turn of wood master, Jan De Cock.

De Hoorn brews in the artisan way. The brewing water is pumped up from local wells and iron and salt are removed.

“We select one of four house yeasts depending on the beer type,” Fons explains.

It remains a challenge to find the right match of yeast, hops, bitterness and other flavours every single time. The bitter hops will soon join the wort in the boiling kettle.

Aroma hops are added at the end of the boiling process or at the cooling down stage. Extra hopped beers, IPAs (India Pale Ale) for example, are dry hopped when they go into cold storage. 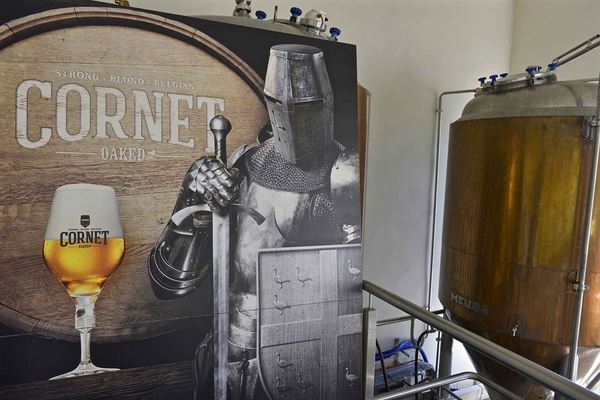 Cornet, the new kid on the block
© BeerTourism.com

A Heart of Wood

“Our beers have a distinctive taste but they are always well-balanced,” says Jan De Cock. “The emphasis is on top-fermented beers, springing from our tradition as part of Palm Belgian Craft Brewers.” 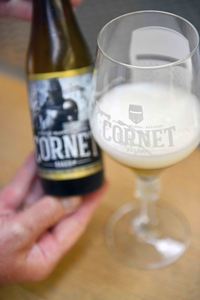 Jan contributed to the launch of Cornet in 2014. “Jan Toye, the brewery’s owner, wanted to create a strong blond beer with the velvety feel of oak-matured French wines,” Jan tells us.

“The Belgian market did not inspire us straight away."

"And we felt that the English blond oak-matured beers were too high in tannins or else they were too bland.”

The brewers carried out experiments with wood chippings from French and American oak.

The more toasted the wood, the bitterer the beer turned out to be. Slightly toasted chippings of American oak were eventually selected.

The wood chippings are used only once to give a taste of fresh beer on wood. In the cold storage tank the beer comes in contact with the wood for about one week. 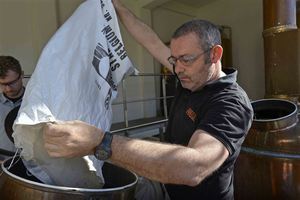 Consistent quality is guaranteed thanks to quality checks carried out at every stage of the brewing and maturation process.

Even today the brewers’ taste buds have the final say.

They decide when the beer has reached its specific taste profile through the action of the oak wood chippings; a craft in itself.

The beer ferments for a week and re-ferments in the bottle instead of the barrel. Cornet is now part of the brewer’s standard range and sales are growing fast. 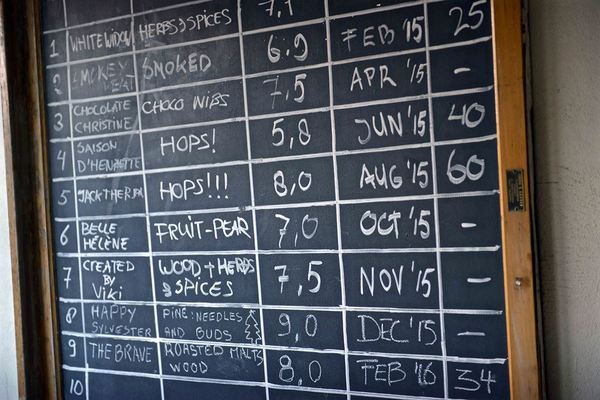 White Widow, Chocolate Christine, Belle Hélène, The Brave, Saison d’Henriette, Jack The R-ipa, Happy Sylvester… No, these are not the characters from a novel. Rather, this is what is written on the 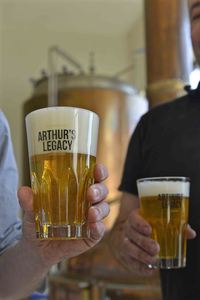 These are the names of the test brews and new beers of the glorious dynasty of Arthur’s Legacy, a homage to former brewery owner Arthur Van Roy. “Each year we produce eight test brews under the Arthur’s Legacy banner", Jan explains in addition.

“First of all, we try them out in around two dozen cafés, including some in the Netherlands. We await the verdict of the café owners and consumers before we bottle the beers and distribute them to 100 to 120 cafés.”

Jan: “We always come up with a basic concept before we start to free wheel. We won’t be hampered by commercial restrictions and other considerations. Anything is possible."

"The inspiration for Happy Sylvester came from resinous wines. As to the Belle Hélène, we replaced the sugar syrup with pear syrup that we added to the boiling kettle and allowed to ferment...” 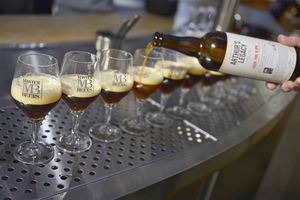 Jan pours out an Arthur’s Legacy Belle Hélène. We say cheers. “We are aiming for beers with a beautifully balanced smell, taste and finish,” Jan says.

“You can taste every single ingredient but we won’t allow any of them to dominate.”

If the test beer turns out to be popular, the next great challenge awaits: brewing on a large scale. “The rules of the game change when you are brewing large volumes,” Fons knows.

“As a brewer, you have to intervene all the time. Fermentation is done in a different way, the temperatures are different, you have to adjust your dosages... To reproduce a small brew on a large scale remains a big challenge.”

Do beers go through a teenage phase before they grow up…? 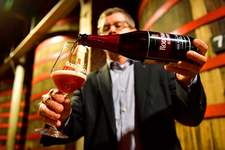 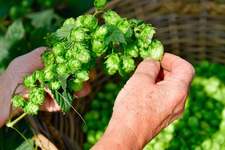 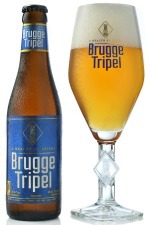