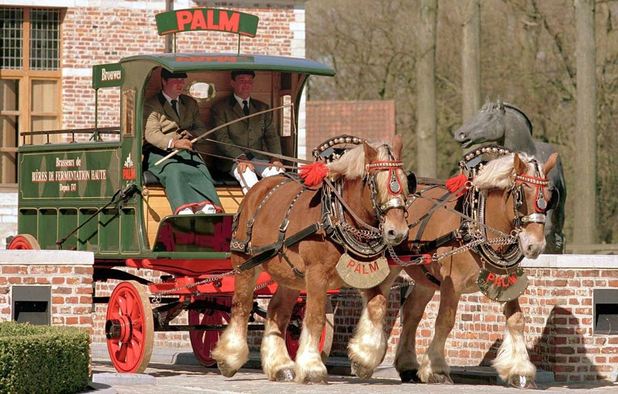 
Horses trudge across the cobblestones, the sound of their clopping hooves resonating far and wide. Steam rises from the horses’ coats and their cloudy breath dissipates before spiralling up to into the sky. 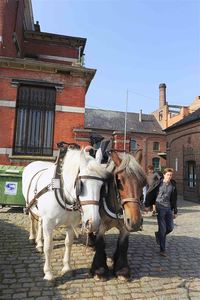 Everyone watches while the horse-drawn cart passes by. We are on a journey through time, enjoying a piece of folklore that is still very much alive.

In these times of bits and bytes and virtual reality, we find ourselves watching a film in slow motion.

There is nothing better than exploring a town or a region, in tune with the rhythm of the horse, immersing yourself in your surroundings.

You could easily forget that horse-drawn carriages or carts were once the main form of transport. And Belgian brewers were no exception.

They used to parade in their carriages during town processions, or just for the sake of it, to emphasise their status.

Barrels were heaved onto beer carts, the horses were harnessed, and off they would go at their own leisurely pace to bring supplies to cafés where thirsty throats were waiting for a fresh beer. In those days, the map of Belgium was dotted with breweries. They were everywhere. 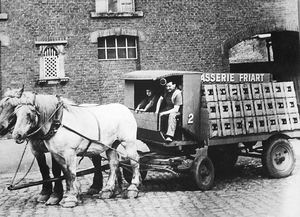 One hundred years ago, our country was home to 3,500. The reach of most breweries was limited to their own home town, village or local area.

If you ventured beyond your part of town, perhaps only a few streets away, you would find yourself in an area covered by a competitor.

People, usually living in cramped housing, would spend their leisure time at their ‘local’.

Your local caff was practically on your doorstep and there was often plenty of time to enjoy what it had to offer. The horse and cart fitted perfectly into this picture; a stark contrast to modern times, dominated as they are by industrialisation, economies of scale and logistics. 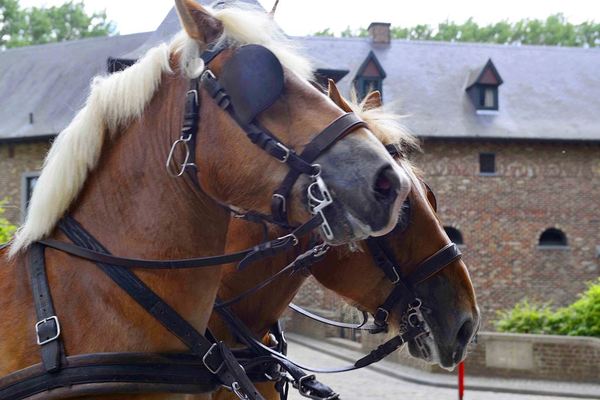 Visit any brewery and you can admire a treasure trove of images from the archive. Gaze at the displays, either on the walls or in a dusty, forgotten corner and you will see every possible type of beer cart, usually 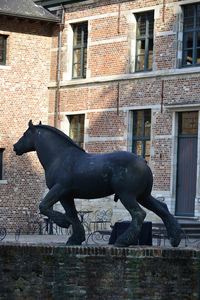 Statue of a "Brabander" at Diepensteyn/Palm
© BeerTourism.com
pulled by a pair of strong and handsome draft horses.

The best-known breed of dratt or Shire horse has to be the Brabant horse, the Brabander, originating from the Brussels region. In the age of the horse this breed was a coveted export product.

From small towns such as Halle, to the south of Brussels, these horses were shipped to destinations across the world.

The expansion of the railways and the popularity of the car put the future of these horses in peril. However, brewers always kept their Brabant draft horses in mind.

Palm Belgian Craft Brewers in Londerzeel even has its own stud farm at Diepensteyn Castle, a stone’s throw from the brewery.

Here you can see the sorrel, or chestnut, horses with their cream-coloured manes galloping through the meadows near the Castle and close to the hop fields. These lovely animals often take part in a parade, pulling a 'praalwagen', or float. From time to time they are even entered into competitions. 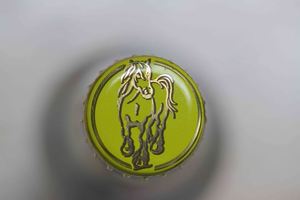 The colour of their coat and mane is suspiciously close to the colours of the Palm spéciale belge amber beer. Surely, this has to be more than a coincidence?

The identification between brewery, beer and horse can be wide-ranging.

This famous and elegant Belgian draft horse from Brabant adorns the label of the Palm beers.

When the brewery’s image was refreshed recently, young people were asked which elements of the logo they felt were dated and which ones they wanted to preserve. The general opinion was that the horse should not be allowed to disappear, and thus the label once again features a Brabander horse, albeit in a stylised version. 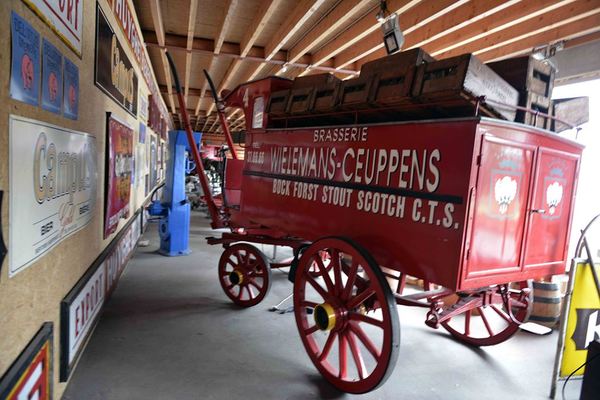 ‘Sustainable enterprise’ is a key concept for many local breweries, many of which are located in the south of Belgium. Brewers take pride in using barley and hops cultivated in their own fields. 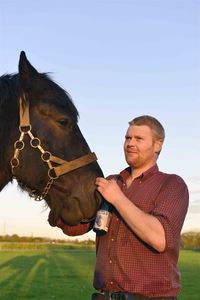 And where brewers take a renewed focus on their own village or region, the draft horse may be in with a chance.

This is already the case with breweries that have remained true to their agricultural roots.

The love of the horse is well ingrained in Dries Janssens, brewer at Hof Ten Dormaal. When asked whether he views himself as a brewer or as a farmer, he plumps for the second option without a moment’s hesitation.

The Saint-Monon brewery in the Ardennes village of Ambly, near Saint-Hubert, celebrates the family tree of the robust Ardennes draft horse.

This race was bred to undertake heavy work in the forest. Now and again, you can see them dragging tree trunks away from places that are inaccessible to tractors.

These Ardennes horses are the toughest of the tough. The story goes that they were the only breed of horse to take part in Napoleon’s campaign against Russia and to live to tell the tale (if only they could!). 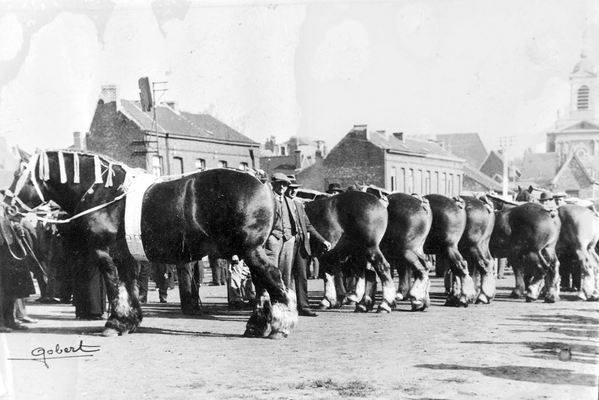 Back when horses mattered...
© BeerTourism.com

Have a Drink on Me!

The role horses play in the city cannot be ignored either. Even to this day, you can see beautifully liveried horses with their gleaming coats pulling floats sponsored by breweries. Unsurprisingly, brewers like to 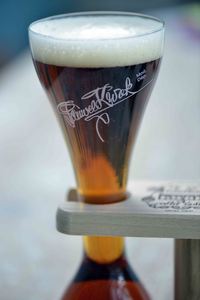 Kwak
© BeerTourism.com
showcase the handsome horses in their stable to add lustre to their company and their beers.

Equine stories abound. There was once a brewer called Pauwel Kwak. He designed a glass specifically for carriage drivers, who were not allowed to leave their horses during a journey and thus were barred from quenching their thirst when their customers stopped off at the coaching inn.

The Bosteels Kwak glass, that manages to stay perfectly upright in its own wooden stand, is a reminder of these thirsty days.

There is still the odd beer cart navigating the cobbles, fired up by genuine horse power. The speed is such that you can keep pace alongside on foot.

When the cart comes to a halt, this could be your lucky day - the brewer may let you sample his wares. No-one will call you to a halt if you enjoy your tastings a bit too much.

This is great advertising for the brewer. Everyone will have seen him come by, at his own leisurely pace, allowing plenty of time to imprint the name of the beer into your memory. After all, time is not in short supply when you use a horse and cart. 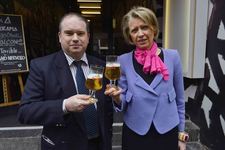 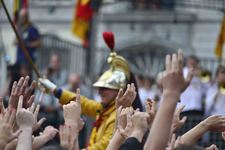 MONS - I had to shake my head a few times just to wake myself up. Yes, I was clutching dragons’ hair. But how did it get there? Surely I had not been doing battle with a dragon? Time to rewind… Sunday morning in Mons... [ more ] 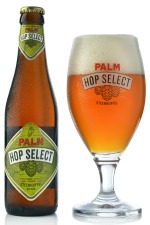 The younger brother of the classic Palm is worthy of its 'Select' name, as it is hopped three times. The first hopping is at the start of the boiling process; then, just before the... [ more ]