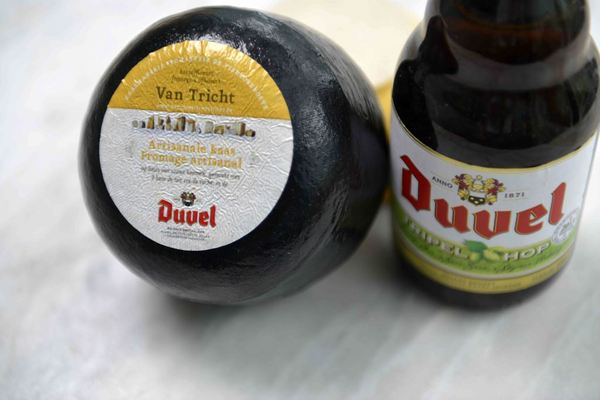 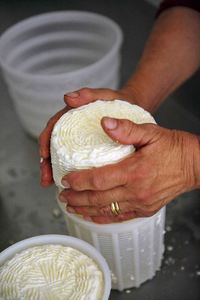 Artisan cheese making
© BeerTourism.com
In addition, beer refreshes the palate while eating cheese, breaking through the film of grease deposited on the taste buds.

Abbey cheeses and abbey beers were talked about in the same admiring breath. It’s no coincidence that a Chimay abbey beer makes a perfect pairing with a Chimay abbey cheese. You may find the taste of your favourite beer returning as you polish off your cheese.

Many abbey cheeses are rinsed in the appropriate beer, bringing back the flavours and smells of your beloved beer in its edible crust.

In France, Italy and Spain, cheeses are matured in wine or wine sediment, so it’s natural that Belgian cheese makers should turn to beer.

French Époisses cheeses are rinsed in Marc de Bourgogne, a pomace brandy. Other cheeses use port or whisky in their ripening process.

In all of these cases, the taste of the liquor is the first factor in its selection. But alcohol is a good preserving agent too. Some cheese masters use this property to extend the storage time of their cheeses, and to combat the formation of mould.

For example, some blue cheeses are matured in whisky, sauternes or port. 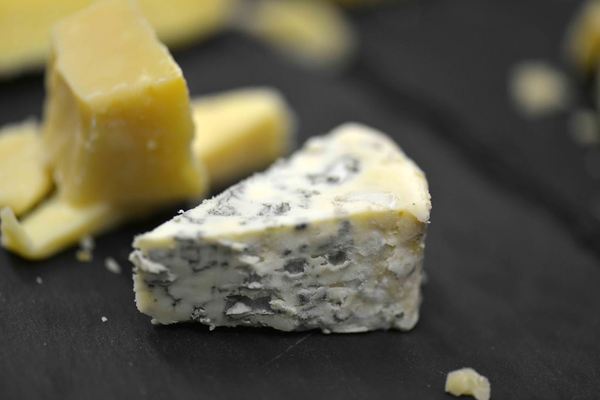 Belgian beer cheeses have started to come onto the market in recent years. These have been produced by adding beer to the milk curds, so the taste and smell of the beer will spread instantly through the cheese. 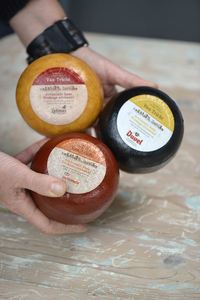 Most are semi-hard or hard cheeses. A cheese full of character needs a beer with an equally strong flavour to balance it out.

So De Vierhoekshoeve dairy uses the strongly flavoured Winterkoninck for its De Koninck cheese, and the hoppy Duvel Tripel Hop for its Duvel cheese. Both are beers with very pronounced tastes and aromas.

It is quite a challenge to craft a cheese in which the taste of the beer comes through. Making a good beer cheese takes experience - and plenty of it. Finding the perfect dose of beer is essential.

The cheese maker, the cheese affineur – in charge of the ageing process - and the sommelier of the brewery involved will conduct tastings at various stages of the process. Step by step, they will create the perfect recipe. An affineur may have high expectations of a beer cheese, but should always go for quality over quantity. 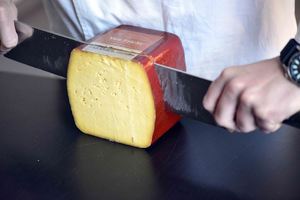 Slicing it...
© BeerTourism.com
He must be very selective - not every beer is suitable for use in cheese.

A good dairy will only consider developing a beer cheese if the beer brings added value.

If you want to taste the beer contained in the cheese, you shouldn’t leave it too long.

As cheeses age, the salt content becomes increasingly dominant, pushing the beer flavour into the background.

As to the brewers, beer cheeses are a handy way to get their beers onto the dinner table, giving them another gastronomic life and a different tasting ritual. The brewer must feel that the beer’s flavour and aroma in the cheese provide added value for both. They alter the taste experience in a positive way. 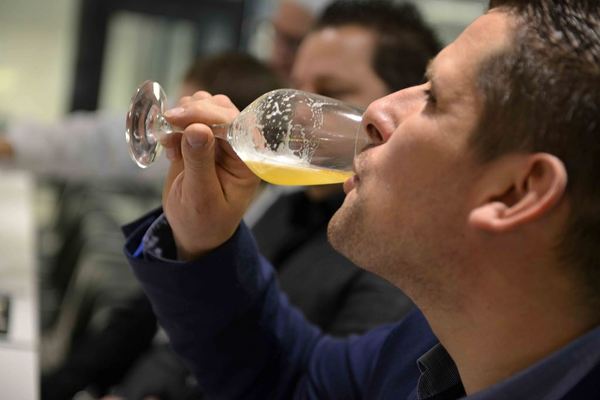 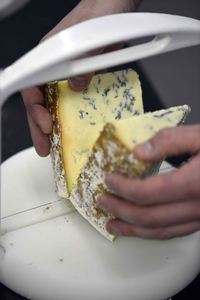 Grevenbroecker
© BeerTourism.com
Take the Maredsous Bruin, for example, with its bitter taste and hints of coffee.

Two very different pairings are possible with this beer: a bitter, blue-veined cheese or a sour goat’s cheese with a crust of ash.

Dark abbey beers are classics for pairing with cheeses. However, a beer cheese also makes a perfect combination with a tripel or a fruity beer, the Liefmans Goudenband for example.

As a general rule, beer cheeses make a great pairing with the beer used in the production process.

A beer cheese reinforces the link between the two products. Have a go at matching yourself; you are guaranteed to find a beer – or a number of beers – to suit your chosen beer cheese.

Cheese is creamy and greasy. The beer dissolves the grease; its carbon dioxide frees up the palate; its bitterness, sourness and low temperature are refreshing. In this way, the entire taste experience becomes more refreshing, lighter and altogether more pleasant. 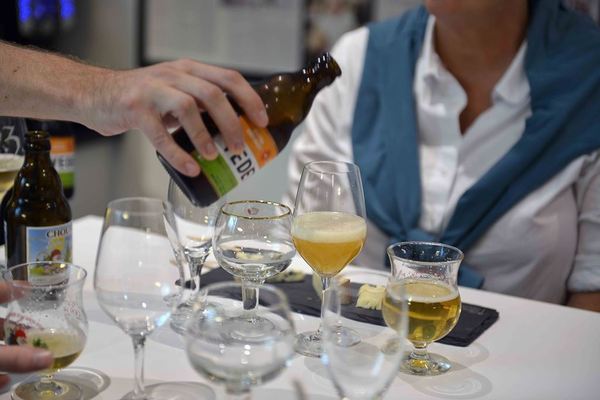 At the cheese dairy

The artisan dairy, De Vierhoekshoeve, is located not far from the Huyghe Brewery in Melle near Ghent. Their first beer cheese was crafted at the request of their brewing neighbours. There are various methods of producing 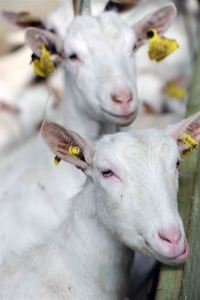 Dairy goats
© BeerTourism.com
a beer cheese. Most simply, you can steep a raw cheese in a beer bath.

However, if you do this with a hard cheese, the beer flavour will permeate only the outside of the cheese. And the beer will soon go off and your bath will have to be refilled regularly. A second option is to inject beer into the cheese.

It is the third option that is preferred by De Vierhoekshoeve: once the curdling agent has been added and curds are forming, the beer is blended into them to ensure the flavour permeates the whole cheese.

The curds are then left to rest for an hour before they are taken by hand to the cheese press and shaped into a hard cheese.

It is essential to get the right ratio of beer to cheese. Generally you are looking at 22 litres of beer to 100 kilograms of curds. However, quantities will vary depending on the taste of the beer. A well-hopped or extremely malty beer will quickly lend its flavour to the cheese and, 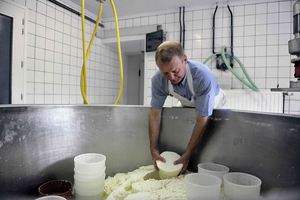 Getting busy
© BeerTourism.com
consequently, less beer is needed to achieve the same result.

The De Vierhoekshoeve cheese maker claims that his unpasteurised cheeses develop a zesty flavour while ageing.

But if a beer cheese is left to mature for too long, the characteristic beer taste will fade into the background. “The beer is most noticeable in the young cheese,” he says.

“People react in different ways. Some will say that the beer aroma in the cheese is too strong, others that it is just right.

Some will claim that the cheese ‘was just lying next to the beer’, meaning that the taste is too faint.” Beer cheeses provide a chance for the cheese maker to make his mark, but he expects them to remain a niche product.

The brewers aren't heavily marketing the beer cheeses, wary of different practicalities, such as the cool storage, that cheese demands. 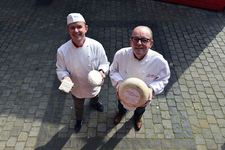 BERCHEM - A store in Berchem near Antwerp has been crowned Best European Specialty Cheese Provider, according to the Wall Street Journal. It has the stellar performance of cheese affineurs Miche... [ more ] 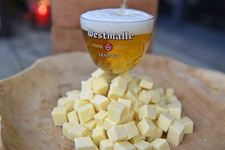 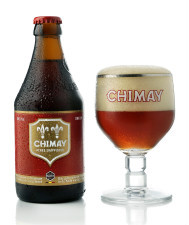 This is a beer with a pedigree. The Chimay Rouge was brewed for the very first time back in 1862, although it was a somewhat different beer back then. The biggest leap forward occ... [ more ]