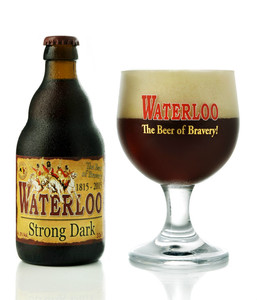 Strong dark beers that fit into the dubbel category, like this Waterloo Strong Dark, are brewed using roast malts that give them their deep dark colour and create a head of froth that is reminiscent of café crème.

A dubbel usually has quite a sweet taste but this degustation beer turns out to be a bit more complex. In fact Waterloo Strong Dark oozes character. Its coffee aroma is derived from the roast malts used during the brewing process.

After just a single taste you feel the taste spread around your tongue, ‘marching like wildfire’, to use soldiers’ jargon. In the finish this beer takes on hints of a liqueur.

This is a beer to reward yourself with after a day well spent. Enjoy it alongside a hard cheese, a blue-veined cheese or alternatively, a chunk of quality chocolate.

All of these beers are brewed in a brand new microbrewery housed in the historic courtyard farm of Ferme de Mont Saint-Jean, situated at the site of the Battle of Waterloo and in close proximity to the famous Lion monument.

This farm served as a field hospital treating British soldiers who had been injured on the battlefield.

A dark, red-brown beer covered by a generous layer of coffee-coloured froth.

Waterloo Strong Dark is served in the traditional, artisanally crafted stone chalice or else can be poured into a classic chalice-shaped branded glass.

This beer is remarkable for its aromas of alcohol and wood, with generous extra touches of fruits. Its taste is rounded and fruity.

The roast malt brings impressions of coffee and toffee. A taste of puréed fruit comes through in the end. Waterloo Strong Dark is a fresh, dark and very quaffable beer that shows plenty of character.

This beer makes a perfect pairing with blue-veined cheese or a chocolate dessert.

Waterloo Strong Dark will store for 24 months in the bottle. On tap (kegs), it will keep for 9 months. There will be no further - positive - taste evolution if stored for longer than advised by the brewery.

Waterloo Strong Dark can be found easily throughout Belgium through the classic channels (specialised beer shops and cafés). Outside of the country you will also be able to enjoy this beer thanks to the extensive export activities of the John Martin Group. 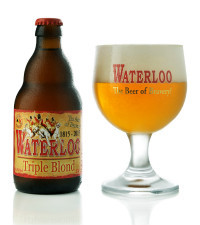 Waterloo Triple Blond is served in its traditional, artisan stone chalice or in a branded Waterloo chalice-shaped glass.... [ more ]