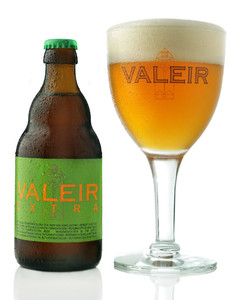 In 2007 Gavere was named at the top of the list of the Villages of the Tour for the Ronde van Vlaanderen, the Tour of Flanders cycle race.

Such an honour is a big taste of the spotlight for any community in this cycling-mad region.

Arthur’s nickname was El Toro, but that name was already trademarked, so to keep the beer going they needed a new name, coming up with Valeir Extra by 2008.

A Valeir is the name given to the soldiers who fought at the Battle of Gavere between Philip the Good and the people of the city of Ghent in 1453.

A statue of the soldier features on the labels of the four beers that Contreras produce under the name.

Valeir Extra is an extra hoppy, blond beer that takes its inspiration from the IPA (India Pale Ale) beer style. IPAs – originally a British beer style - tend to be extremely bitter and can be highly aromatic as well.

The heavy hopping of the original IPAs was meant to help preserve them for the long sea journey to the UK’s thirsty Indian armies.

These days, the international craft brewing scene has fallen in love with the style.

Those made by Belgian brewers tend to be balanced, well-hopped, quite bitter and aromatic. Valeir Extra is a prime example in this style.

Valeir Extra is made with water, barley malt, Sterling and Amarillo aroma hops, sugar, and yeast.

Valeir Extra is a slightly cloudy beer with a golden-blonde colour in the glass under a delicate, white head.

The Valeir beers are served in an elegant, branded chalice that rests on a tall stem.

Valeir Extra has the fragrance of hop cones and is aromatic and zesty with hop bitters in the finish.

It is a well-balanced and complex degustation beer.

This hoppy blond is equally happy in the company of a mild sheep’s cheese as it is with a strong, blue-veined cheese of the Roquefort type.

It is also recommended in pairing with deep-fried fish, fish burgers and zesty or spicy dishes, a pizza diavola for example.

Keeps in the bottle for 24 months. In kegs it will keep for up to 12 months.

Always store your bottles upright in a cool and dark place.

Keeping the beer longer than advised by the brewery will not improve this beer. As with all well-hopped beers, the 'hoppiness' diminishes over time.

Valeir Extra is available in 33cl bottles and kegs of 20l and 30l.

Contreras is well represented locally so in it's home region you will have no trouble finding it on the menu. Around Belgium you will find the beers from Gavere via the usual channels; abroad you will be able to find them too. 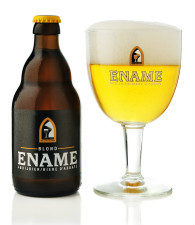 The Ename beers are served in a classic, branded chalice, typical of the kind used for abbey beers.... [ more ]