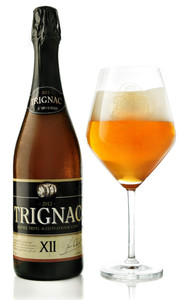 Trignac from Castle Brewery Van Honsebrouck was introduced in the spring of 2013 and is far more than a tripel matured in oak barrels. It is, in fact, the first genuine tripel matured in recycled French cognac barrels.

These special maturation barrels can only be used sparingly. It is therefore no surprise that this beer has a very limited production run and is marketed in numbered bottles. The beer’s name is a reference to the French community of Trignac.

In addition to being the most exclusive beer in the range, the Trignac is also the heaviest Kasteel beer based on its alcohol percentage. The Kasteel Tripel enters the barrel with an alcohol percentage of 9% ABV to end up being bottled at 12% ABV.

After all, one has to take into account that every used barrel will still contain a number of litres of cognac (absorbed by the wood), that are released into the beer during ripening.

Top-fermentation, refermented in the bottle.

As the Kasteel Tripel is used for the production of Trignac, the ingredients are the same; malt, maize, sugar, (Belgian) hops, yeast and water.

In comparison with the Kasteel Tripel this is a less clear beer with a less pronounced golden colour.

The beer is more yellowy and cloudy than its mother beer, which is obviously caused by the ageing process.

The Trignac, just like the Cuvée du Chateau, comes with its own separate and exclusive degustation glass. Apart from the logo on the glass there is no difference between the drinking vessels for the Cuvée and the Trignac. This glass is not easy to get hold of, similar to the beer.

Trignac is indisputably a gastronomic degustation beer through and through. It is obvious that it shares many taste touches with Kasteel Tripel but it has turned out to be a different beer.

The taste is full and round with a delicate touch of cognac, which is far from overpowering. The finish is mildly bitter.

This is the perfect beer to enjoy slowly after an exquisite dinner or at a quiet night at home with a Belgian cheese platter in front of the open fire.

As this beer was only recently introduced, we cannot give much of an opinion on its longevity. However, brewer Hans Mehuys does say it is not one to store very long.

This is a very rare Belgian beer. Only 9,000 champagne bottles were produced containing the first edition Trignac. All of these were numbered and presented in a beautiful gift box. The brewery intends to produce and bottle a limited edition of this beer on an annual basis.

The large majority of these bottles were destined for the export market so there is a very slight chance of locating this beer outside Belgium, if you’re lucky.

Irrespective of where you buy it, it is almost certain that the price you pay will be higher than the by the brewery recommended retail price, simply due to the beer’s limited availability. 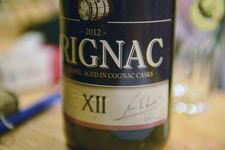 INGELMUNSTER - On the 10th of March, Castle Brewery Van Honsebrouck will be officially presenting this years' Trignac XII at the "Prik & Tik" fair in Belgium. Reason enough then for us to visit Xavier Van Honsebrouck and... [ more ]

For this unique beer, the glass selected is very far removed from that normally used for Belgian beers. It was decided to serve Passchendaele in an English pint glass. The glass is... [ more ]