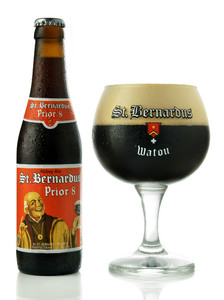 Between 1946 and 1992 the beers of the Sint-Sixtus abbey in Westvleteren were brewed by the St. Bernardus brewery. In 1992 production reverted to the abbey of Westvleteren.

This means that the recipes for the St. Bernardus Prior 8, Pater 6 and Abt 12 go all the way back to 1946. And to this day, these abbey beers are brewed using the original Westvleteren yeast. This yeast is retrieved from previous brews and topped-up regularly with fresh yeast.

Over the years the brewers have fine-tuned the original recipes and one of the key ingredients of these beers is time.

Thanks to the long period in cold storage – up to eight weeks – the beers tend to be very full in the mouth.

There is a striking balance between malt flavours, fruitiness and sweetness enhanced by a very long and pleasant finish.

St. Bernardus Prior 8 fits into the tradition of dark abbey beers of the dubbel type. Originally the term dubbel was used to indicate a doubling of some raw ingredients in the brewing mash. These days a dubbel is a strong dark, sweet or bitter beer.

This beer is dark brown in colour with a silky-soft collar of cafe-crème froth that clings to the glass and preserves the aromas beautifully.

This beer should be served in the original and traditionally shaped St. Bernardus glass that is perfectly suited for their abbey-styled beers.

As is typical of the St. Bernardus beers, there are salty touches provided by the water used for brewing.

Furthermore, there is an astonishing balance in the glass.

The beer is full in the mouth and fruity, with impressions of banana and date; it is subtly sweet with a pleasantly long finish.

This well-balanced beer with its broad spectrum of tastes will adapt to almost any dish, whether as a pairing or used as an ingredient.

St. Bernardus Prior 8 suits most cheeses, is happy to accompany a rabbit or venison stew either in or next to the plate, forms a great addition to sauces for lobster dishes, and also teams up well with Belgian chocolate.

Can be stored for 60 months in the bottle; on tap (in kegs) it keeps for 12 months. Do not store for too much longer than advised by the brewery.

St Bernardus Prior 8 is available bottled (33cl, 75cl) and on tap (20l kegs). As with other Sint Bernardus brews you will often find this one on tap in the Westhoek region where the brewery is situated.

Besides being widely available across Belgium you are also able to buy Prior 8 outside of its country of origin; the USA is a particularly prominent export market for the brewery.

St. Bernardus Abt 12
The St. Bernardus Abt 12 is the flagship brew from the range of abbey beers put out by this Watou brewery. This beer is a something of a runaway success, and accounts for more than half of the total brewery output. It's by no me ...
[ read more ]

St. Bernardus Tripel
Between 1946 and 1992 the Sint-Sixtus Westvleteren abbey beers were brewed by the Sint Bernardus brewery. When the monks of Westvleteren decided to start brewing their beers within the abbey walls again, Sint Bernardus were concer ...
[ read more ] 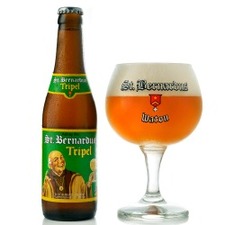 St Bernardus Tripel should be poured into the traditional St Bernardus goblet that was developed especially for abbey beers. ... [ more ]