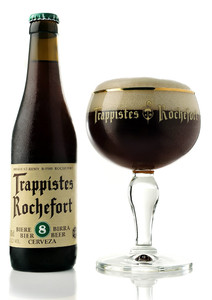 History and provenance are readily apparent, in the taste of the 8. Ever since the 1960s, Rochefort’s own yeast culture has produced those characteristic esters in its divine brews. And even today, in 2014, Rochefort's famous Trappists continue to brew using water from the calcium-rich Tridaine spring, 42 metres above the abbey. This spring water is said to have a unique composition, readily transformed into the dark Rochefort beers, in the monks' ‘brewing-hall cathedral’. Just add barley malt, wheat starch and hop pellets.

While the basic recipe for the three beers remains the same, what makes each distinct is the amount of malt and candy sugar added. Rochefort 8 is considered the ‘lad’ among the three, with its green-bottle cap hat, which first saw light in 1954. This youngest member of the family straightaway received a warm welcome, after its commissioning by one particular (and rather important) client. One year on, and it was made an official addition to what is now the Rochefort trio, and marketed as a ‘spéciale’. Some still refer to it by this name.

The Rochefort 8 is a beer to be savoured at your leisure. Not too dense, it goes down easily, quietly sparkling. The alcohol in the finish never lets you forget that this is an authentic degustation beer, one that cannot be hurried along. It is sweet and chocolatey, pleasant but certainly never boring. The same can be said of the alcohol content – it makes itself known, but it never overpowers, leaving plenty of room for all the rich subtlety to be found in a glass of the 8.

A high fermentation beer that re-ferments in the bottle.

A smooth and clear milk-chocolate colour is captured in the glass, nestling below a luxurious cloud of froth. The Rochefort 8 is a brown beer, but it is not as deeply coloured as the Rochefort 10.

Traditionally served in the elegant Rochefort chalice adorned with the gold aureole. This glass is reminiscent of a compressed tulip shape and proudly displays the Rochefort name in its characteristic luminous Gothic writing. From the foot upwards, the stem thickens very slightly, until it reaches the glass, like a reversed drop of water that flows towards the chalice.

The house yeast packs the first punch with its herbal aromas – along with a hint of dairy – complemented by a slightly phenolic character, and a sweetish alcoholic taste that spreads gradually. You can taste the soft caramel in those milk chocolate aromas, before they evolve into a malty bitterness that is particularly noticeable in the finish, before all concludes with an impression of cloves.

A fillet of pork with a sauce containing cocoa, accompanied by waxy potatoes and Rochefort 8, results in a pleasantly bitter-sweet marriage. This beer is also a match for strong, Belgian cheeses of the ‘Achelse Blauwe’ variety. Feel free to hunt out your favourite chocolate. Dark or extra bitter is absolutely fine. Want to be extra-decadent? Pair it up with your favourite rum.

When it comes to how long you can store this beer, opinions are wildly different. Everyone has their own individual opinion, from scientists with their purely empirical vision, to beer-lovers bending to their own personal tastes. It is undisputed that the Rochefort 8 can be laid down for at least five years. After that it is up to every beer lover and expert to find their own individual preference.

The Rochefort 8 is distinguished by its green-crown cork, with the number 8 stamped on in white. The Rochefort 8 joins the 10 in being the most wide-spread variety of Rochefort. This beer is not, however, available on tap. But unlike the Westvleteren, for example, it is a beer that's still relatively easy to get hold of.

In Belgium it can be found in quality beer cafes and beer shops. It is also stocked by a number of supermarkets. You will also be able to locate this beer outside of Belgium, albeit not on the same scale as a Chimay or Westmalle, for example. 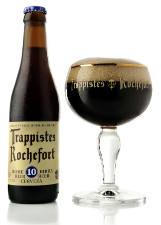 Like most Belgian beers, this one also has its own proprietary Rochefort glass. As is typical for Belgian Trappist beers, this glass is tulip-shaped. The drinking vessel can be p... [ more ]