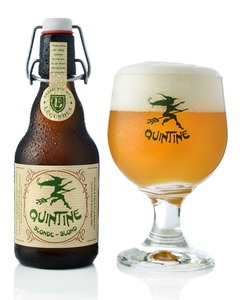 Both breweries already had something in common in their love of the unique folklore in their native Hainaut. This brewery with its visitors’ centre is located in the beautiful Pays des Collines natural park.

Quintine Blonde is barrel-aged and comes in a flip top bottle. The beer is named after a so-called witch who was burned at the stake in 1610.

Brasserie des Légendes is strongly rooted in Hainaut’s agricultural scene. Brewer-owner Pierre Delcoigne is a sixth-generation farmer, and he wants to increase people’s appreciation of his home province’s outstanding produce.

He brews with locally grown ingredients, his own untreated brewing barley for example, and Belgian hops.

His unfiltered, unpasteurised beers are characterised by their full body and moderate hoppiness. There are no herbs, just water drawn from a well with a fairly high mineral content; house yeast; malt, and hops.

The Goliath beers are named in homage to the giants of the nearby city of Ath. Agatha Christie’s Hercule Poirot is brought back to life in the Hercule Stout. The list finishes with the Saison Voisin, Goliath Triple, Ducassis (an organic, gluten-free fruit beer) and Legends Harmony.

Quintine Blonde is a top-fermented beer that re-ferments in the bottle.

This beer is brewed with well-drawn water, house yeast, aroma hops, and a pale malt.

In the glass, Quintine takes on a blonde colour topped with a pure white head. This unfiltered beer has the cloudy look that is typical of this process.

Quintine is served in a tall-stemmed chalice. The glass depicts the witch on her broomstick.

This blonde delivers fruity aromas before mild flavours of grain and sweet malt and impressions of alcohol and hops.

This strong blonde pairs well with spicy Asian curries. It also makes a great match with mature hard cheeses, a robust piece of meat, fish, or a fresh salad.

Kept correctly the beer can be stored in the bottle for 24 months. In kegs it will keep for 9 months.

This beer is not one to keep for years on end; when stored always keep your bottles upright and in a dry, cool and dark place.

You will find Quintine in most specialised beer shops in Belgium and even in some supermarkets around the country the beer can be found on the shelf.

Outside Belgium, when looking in the right places, you will be able to pick up some of the brews crafted by Brasserie des Légendes.

Goliath Triple
Ath is the city of giants. You can watch them on parade during the annual Ducasse d'Ath procession held over the fourth weekend of August. Goliath – Gouyasse in the local dialect – always heads the march. Not far from the parade ...
[ read more ] 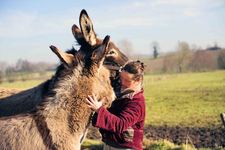 Goliath Triple is served in an elegant degustation glass on a tall stem. It preserves the head and enhances the aroma of the beer for the drinker. ... [ more ]