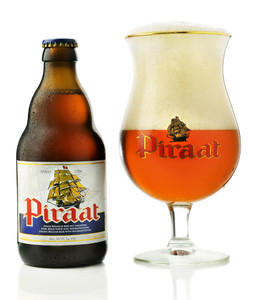 Piraat beer was developed and launched in 1982 by Brouwerij Van Steenberghe in Ertvelde, situated near the city of Ghent. This strong amber beer was actually created at the request of the brewery's Italian importer. Interestingly Gulden Draak, the brewery's flagship brew, also saw the light due to a request from the same importer.

Brewed with natural ingredients, Piraat is a true strong amber speciality beer that re-ferments in the bottle. No less than three malt varieties are used to brew this beer (Pale Ale, Pilsener and Munich malt) as well as Aurora and Petra hops.

The use of these selected ingredients results in a beer that comes close in taste and style to the typical European’s IPA’s.

Where the classic Piraat comes close, Piraat Triple Hop, the younger and recently launched sibling can be classified as a 100%, uncut IPA. When creating this copper coloured beer, the brewery found inspiration in tales of pirates, who are notorious for their insatiable thirst..

Piraat is a top-fermented Belgian speciality beer, which re-ferments in either the bottle or barrel.

This beer is brewed with 100% natural ingredients; water, yeast, Pilsener, Pale Ale and Munich malt plus Aurora and Petra hops.

When served correctly and poured into a clean and dry Piraat glass the beer develops a copper-amber colour, complimented by an impressive white collar of froth that lasts.

Piraat is served in an elegant, tulip-shaped branded glass. The glass sits on a tall stem, widening towards the top, allowing a beautiful head to form and the beer’s aromas to develop fully.

Bitter, zesty (coriander and peach), malty and alcohol aromas are the main features of this degustation beer. Its taste is a symphony of malty (caramel) and sweet impressions complemented by hop bitters with an undercurrent of alcohol.

These first impressions are followed by a long finish that is slightly sweet with a trace of hop bitters.

Piraat is a digestive beer with many culinary qualities. At the table it suits hearty and strong flavoured dishes such as game and foie gras.

The beer pairs up nicely with a cheese platter, especially ripened and refined cheeses such as a Remoudou, Wynendaele, Trou d’Sottai or Vieux Chimay.

As with everything in life beauty is in the eye of the beholder so don't be shy to experiment with this beer to find your own favourite food pairing combination.

This is a beer that can be rested safely in a cool, dry and dark cellar. Thanks to the re-fermentation, the taste will continue to evolve in the bottle.

For optimal storage always keep the small bottles upright and the large ones laid down.

The brewery is both active and successful in it's export actives, so you should have no trouble finding Piraat beer outside of Belgium.

Gulden Draak
The beer first saw the day of light as a one-off brew commissioned by the mayor of Evergem. It was added to the brewery's regular range when Italian guests of the brewery tried it and liked it so much they insisted on its continue ...
[ read more ] 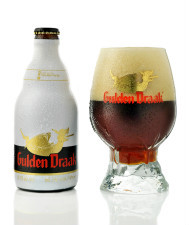 Gulden Draak is served in a unique and specially designed glass, which represents a dragon's egg perched on a rock. Also remarkable is the striking opaque white bottle showing the ... [ more ]