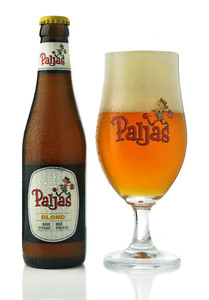 Paljas Blond was launched at the BAB Brugs Bierfestival in 2013. It is relatively light and could be described as a thirst-quencher; nevertheless, it is also a rounded degustation beer that was developed by beer aficionado and sommelier Mathias Van Den Poel.

In contrast to many other blonde beers, the Paljas Blond has quite a bitter aroma (30 EBU) yet it retains its fruitiness thanks to the use of four different varieties of hops.

Paljas Blond is an unfiltered, top-fermented beer that re-ferments in the bottle. It is a light-hearted beer that does not take itself too seriously.

The name of ‘Paljas’ translates as ‘jester’ or ‘buffoon’. The word itself is a corruption of the Italian ‘pagliacci’, as in the eponymous opera ‘I Pagliacci’ composed by Ruggero Leoncavallo. The tiny Paljas figure on the label can also be regarded as a little scoundrel.

This beer is equally popular in Belgium, particularly at events and in beach bars during the summer, as it is across its borders. Thirty per cent of the total production is sold on tap.

This golden blonde beer shows a slight pearlisation underneath a cloud of white froth.

The Paljas beers are served in an elegant, tulip-shaped, high-stemmed branded glass that allows the aromas to fully develop.

A rounded and full-mouthed taste in view of its low alcohol percentage; quite bitter with a slightly sweet touch.

The beer has a fresh and pleasant aroma.

This blonde thirst-quencher makes a good match with refined preparations of fish. The beer will never threaten to dominate the meal.

Sustainability in the bottle: 24 months. Sustainability on tap: 12 months. Do not keep this beer beyond the brewer’s recommended best-by date.

Always store bottles vertically in a cool and dry environment.

Paljas is already widely available in Belgium so you will find it easy to get hold of this beer at better beer retailers and supermarkets, as well as in specialised beer cafés.

Paljas is enjoying increasing export success and so even abroad, this beer should not be too hard to track down. 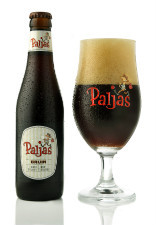 In common with most Belgian specialty beers, Paljas has its own branded glass, elegant, tulip-shaped and high-stemmed.... [ more ]