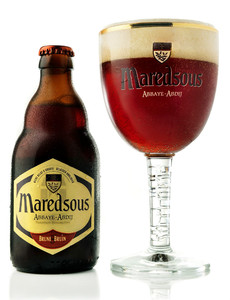 Belgium is justly proud of its ancient monastic tradition, one that goes back centuries. The French Revolution (1789-1799) wiped many abbey communities off the map. A number of these, however, were re-established in the 19th century – and Maredsous Abbey was among them.

All accredited abbey beers have a link to this monastic heritage, as on the grounds of most abbeys there would usually be a brewery. Needless to say, a dark abbey beer is a classic component of that heritage, included in the range of many-a-Belgian-brewer. Enter the Maredsous Bruin or Brune, a dark-yet-light abbey beer, with a marked subtlety and balance.

The first taste is one of caramel. This is followed immediately by a pronouncedly burnt aroma reminiscent of coffee (mocha). Maredsous Bruin is easy to digest, not too heavy by any means, but the alcohol certainly makes its presence felt.

The bitterness originates predominantly from its nutty character, which teams up nicely with the roast flavour of the dark malt varieties. This bitterness can also be detected in the finish, one that is lingering, but in the most pleasant of ways.

Maredsous Bruin is a high fermentation beer that re-ferments in the bottle. The main fermentation takes place at around 25°C.

Maredsous Bruin shows a reddish-brown colour in the glass and provides a dark and rich collar. Do not pour the yeast in with the beer, but serve it separately if you wish.

The Maredsous beers are served in chalice glasses, which is characteristic of abbey beers. In the visitors’ centre you can also enjoy the freshly tapped beers from stone mugs, produced by local artisans in the abbey’s workshop.

Roast and burnt aromas with a slivers of coffee and dark chocolate. A delicate caramel bouquet with subtle hints of dark fruits, chocolate and caramel.

Maredsous Bruin is delicious with cheese, but is robust enough to stand up to meaty dishes. A less obvious pairing is with dark chocolate. Just like a coffee, this beer’s taste and malty aromas will melt beautifully into that of a bittersweet cocoa delicacy.

Provided it is stored correctly, this beer will keep for three years after bottling, without noticeable changes to the taste or colour of the beer.

This brew will keep for nine months in the barrel. Optimum storage is to be had in a dark, cool room, with the bottles stored vertically.

Maredsous Bruin is available in 33cl and 75cl bottles, and in barrels of 30L and 50L. You can taste and purchase it when you visit the abbey.

The beer is relatively easy to get hold of in the more specialised cafés, beer shops and even supermarkets, both in Belgium and abroad.

Maredsous Blond
This golden-hued abbey beer could be considered as one of the most traditional of Belgian beers. It has a pedigree that stretches back to before the French Revolution. During that time, many Belgian abbeys ceased to exist, and th ...
[ read more ]

Maredsous Tripel
As far as the monks of Maredsous are concerned, the Maredsous Tripel is a party beer, their ‘nec plus ultra’. This tripel is a tipple that is imbibed on special occasions, standing out thanks to both its intense colour and taste. ...
[ read more ] 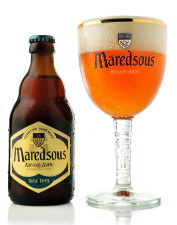 All Maredsous beers have their own specially designed chalice-shaped glass, typical for all abbey and Trappist beers.... [ more ]