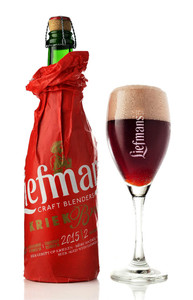 The basis for Liefmans Kriek Brut was laid in the years 1900 to 1930, when local farmers started popping in to Liefmans, to ask for a barrel of beer to use with their glut of 'krieken' (cherries).

But it was Pierre Van Geluwe-De Berlaere who was the first brewer at Liefmans to do the reverse – and add some 'krieken' directly to the beer maturing in the tanks.

A Liefmans Kriek Brut is not to be confused with any other 'kriek'. The beer is brewed only once a year, using Belgian fruit exclusively, and – to top all that – is matured for 18 months, before it is ready to leave the brewery.

The beer is also a complex blend – between 15 and 20 different batches of Goudenband and Oud Bruin are used. Red fruit aromas first appear when the beer is poured – then a hint of marzipan, mixing with the lusciously sweet fragrance of warm cherries.

You immediately get a pleasantly sour taste, which evolves into a sweet finish. This fruity beer also gives you a perfectly-dosed, robust fullness, which makes for the long-lasting enjoyment of the many different tastes you come across, as it is savoured.

Liefmans Kriek Brut is a mixed fermentation beer. This means that, before re-fermentation, there is also a spontaneous fermentation that occurs when the beer is exposed to the wild yeast cells that are naturally present in the air.

The underlying beers for the Kriek Brut are brewed with natural ingredients: pale and dark barley malts, Herkules hops and Noordkrieken cherries from Gorsem.

Each hectolitre of this beer will contain up to 13 kilos of fruit that will mature in the tank alongside the beer.

This Liefmans is a clear beer, with a warm, deep reddish-brown colour. It forms a nicely pale collar.

With the exception of the Liefmans Fruitesse, this brewery offers the same glass for all of its beers: the elegant, stemmed Liefmans glass. This glass can be obtained through specialised beer shops or the brewery’s online shop.

A surprisingly balanced 'kriek' beer, with a full-mouth feel. The sour and sweet tastes are perfectly balanced with the cherries.

Offers a rich cherry bouquet with touches of wood and almonds. Liefmans Kriek Brut is complex, lusciously sweet with a fresh touch.

Liefmans Kriek Brut does a great job on the plate, as well as next to it. A delicious pairing can be had with tomato, oysters, venison, roast duck, balsamic vinegar dressings, cloves, cherries, strawberries, raspberries, black chocolate and Belgian unpasteurised blue cheeses.

Just like the Liefmans Goudenband, this beer can easily be stored for ten years in a dark and cool room. Bottles must be stored vertically.

Owing in part to its complexity, this is one of the very few Belgian beers whose taste improves markedly with storage.

Liefmans Kriek Brut is available in 37.5cl and 75cl bottles and on tap. Needless to say, it is not as prominently present as the Fruitesse.

Both within and outside Belgium, you are certain to find this beer in the more specialised cafés and beer shops. Duvel-Moortgat exports its beer all over the world, so fans exist in every corner of the globe.

Liefmans Fruitesse
The youngest member of the Liefmans family was introduced some years ago, in the summer of 2009, as an ideal summery aperitif beer – one that could be served on ice. “Fruitesse on the Rocks!” is its tag-line. Fruitesse doesn't pr ...
[ read more ]

Liefmans Goudenband
The original name of this beer was IJzerenband (Iron Band). It used to be categorised as a 'provisie-bier' – a beer for storage – as it was slightly heavier in density and alcohol than the Oud Bruin, and matured longer 'in-bottle ...
[ read more ] 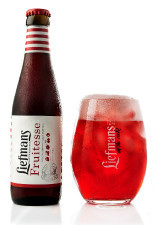 A glass was developed especially for this Liefmans Fruitesse: the Liefmans (On The Rocks) tumbler glass 2/3 of which is filled with ice cubes.... [ more ]