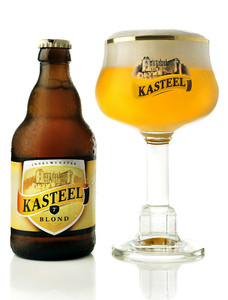 Kasteel Blond is a real thirst quencher. A refreshing, characteristic blond Belgian beer with a 'relatively' low alcohol content, especially in comparison with the average alcohol content of some of the other beers in the “Kasteel” range.

Also bearing in mind that with its Trignac the brewery counts a 12% ABV heavyweight among its ranks.

The brewer, Brouwerij Van Honsebrouck, promote Kasteel Blond as an easily digestible beer, crystal clear down to the last drop. This beer is by no means extreme, which makes it accessible and appealing to a wide public of beer consumers.

Originally, Kasteelbier Blond was a beer of 11% ABV. When, some years ago, the brewery changed its name and style from “Kasteelbier” to “Kasteel”, the original Blond became the current Tripel.

Kasteelbier Blond was then introduced as another addition to the renewed range.

The unique and distinguished “Kasteel” glass with its gold rim is familiar to many beer lovers.

The after-taste is also quite sweet but without a ‘sticky’ mouth feel.

There are very few beers that cannot be enjoyed either on the plate or next to it with some typical Belgian cuisine. This Kasteel Blond is no exception. As it is not a heavily hopped beer is ideal for use in the kitchen, for example to add to the stock when cooking mussels.

Also in combination with roast meat or delicate fish preparations this is a worthy table companion.

Kasteel Blond is brewed to be consumed. If you take into account the relatively low alcohol content and the beer’s characteristics, this is a beer you should enjoy when it’s young.

There will not be a further, positive taste evolution if you lock this beer away in your cellar for years on end.

As an important representative of the “Kasteel” brand it’s brewed throughout the whole year at the Castle Brewery Van Honsebrouck.

It can therefore be readily acquired through resellers, supermarkets and of course (online) specialized beer shops.

You won’t have trouble finding Kasteel Blond in the more beer orientated bars and cafés. As with many Belgian breweries Van Honsebrouck exports across the world. 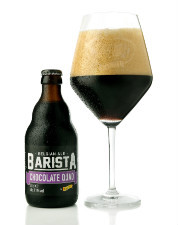 Barista is a unique beer within the Kasteel range and as such has an impressive glass to compliment it. As with the other Van Honsebrouck gastronomic beers (Trignac and Cuvée du Ch... [ more ]