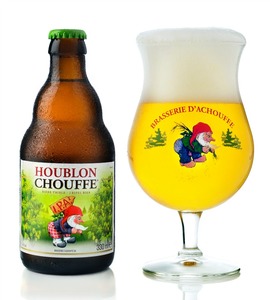 The Houblon Chouffe is a crossover beer – a Belgian interpretation of the India Pale Ale (IPA), a beer style originating in England. Extra hops were added to these ales, to make sure the beer survived the long sea voyage to India – hence the name. And of late, the IPA style has become all the rage in the United States, where beer-lovers are keen for tastes on the bitter side of things.

Brasserie d’Achouffe was one of the first Belgian breweries to see the potential, and launched its own IPA in 2006. It even included American hops. The result, the Houblon Chouffe, is three times as bitter as La Chouffe. This is beer that's certainly not beating around the bush, when it comes to hoppy intensity! There is an immediate blast of pure hops aromas, with various elements that fizz in the nose and caress the tongue.

The Houblon Chouffe starts off with a discernible citrus touch, with grapefruit prominently there, before blending into its herbal, green hoppy character. Unsurprisingly this is a determinedly bitter beer, supported by a generous alcohol content and a pleasant, drying finish. A potent and characterful beer, both for lovers of this style, as well as for real connoisseurs.

Houblon Chouffe is, just like La Chouffe, a high fermentation beer that re-ferments in the bottle and in the barrel. To this end, yeast and sugar are added just before it is bottled.

The strong blond Houblon Chouffe is brewed with water, pale barley malt, plus the European Saaz-Saaz, and American Tomahawk and Amarillo, aroma hops. The Amarillo hop is then used for dry hopping, to develop the bitter flavour.

The Houblon Chouffe colours a light blond, and presents a rich white collar with fine bubbles. The yeast can be poured with the beer at the end of serving.

Unlike the Mc Chouffe and the La Chouffe, the Houblon Chouffe is not served in a tulip-shaped glass but in its very own, elegant flute (33cl).

The Houblon Chouffe gives amazingly powerful hop aromas, with touches of citrus including grapefruit. Thank the American aroma hops for that wonderful nose. That same combination reaches over to the flavour, where a rich and complex hoppiness is shot through with that citrussy grapefruit. But there are fruity touches, too, coming from Achouffe’s own distinctively flavoured yeast. All of this taste complexity is well balanced, thanks to the higher alcohol content.

In common with La Chouffe, this beer will keep for 36 months in the bottle and for 12 months in the barrel. It can be stored for up to three years after bottling without changes in taste or colour.

However, if you keep it for longer, this beer’s hoppy character will almost certainly be affected.

Less well known than La Chouffe, but enjoying the same affection, the Houblon Chouffe is available in 33cl and 75cl bottles and in 20L barrels.

Mc Chouffe
This dark brother to the famous blond La Chouffe first hit the market back in 1987. The Mc Chouffe aims to steer a middle course between a traditional dark Abbey beer, belonging to the ‘dubbel’ beer style, and a Scotch ale (althou ...
[ read more ]

La Chouffe
La Chouffe is Brasserie d’Achouffe's star brew. This strong blond ‘gnome beer’, first brewed in 1982, today accounts for 80 per cent of the brewery’s output. Not only did the brewers make history with this, their first Ardennes ...
[ read more ] 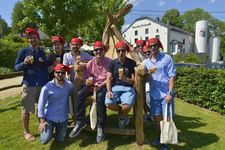 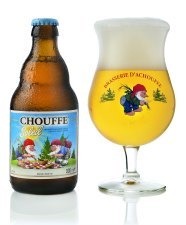 The La Chouffe tulip-shaped glass (25cl or 33cl) is the drinking vessel recommended to bring out the best of the Chouffe Soleil. A 12cl tasting glass is also available. The Chouffe... [ more ]