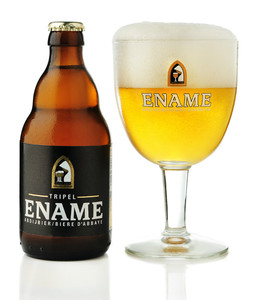 This abbey beer has roots deep in local history. Its origins go all the way back to the Treaty of Verdun, concluded in 843. This landmark agreement made the river Scheldt the designated border between Flanders and the German empire.

A fort was built at Ename to keep the Count of Flanders and his troops on their side of the river. By 1063, the fort was in the hands of Benedictine monks, who converted the military fortifications into an abbey. Before long, beer was being brewed in this location. Ename Abbey was destroyed during the French Revolution and never rebuilt.

In 1990, Brouwerij Roman from Oudenaarde (which was founded in 1545) launched a range of abbey beers under the Ename name. The birth of the Blond, Dubbel and Tripel was marked with an open-air spectacle, held amongst the abbey ruins.

Twelve years later, a fourth sibling was added to the Ename family, with a winter beer originally called the Ename Cuvée 974. The name refers to the year the village of Ename was established. Nowadays, the beer is sold under another name: Ename Cuvée Rouge.

Ename Tripel is a classic tripel in the rich tradition of Belgian abbey beers. The Tripel denomination means that higher quantities of each ingredient are used. So this is a heavy, predominantly blond beer, with a powerful taste of malt and hop bitters.

Ename Tripel is brewed with all-natural ingredients: water drawn from the brewery's own well, malt, hops, candi-sugar, and an in-house strain of yeast from the Roman Brewery.

Ename Tripel is a deep golden, burnished straw colour, with a dependable, rather robust snowy-white collar, all accompanied by a delicate and fine pearlisation.

For the best results, always use a clean, hand-washed (and hand-dried) glass for an optimal pour. In our considered opinion its best never to use a dish washer for your precious beer glasses!

As you might expect with these abbey beers, all of the Enames are served in a classic branded chalice, styled by the Roman brewery for the perfect serve.

This beer has the fruity, zesty aromas of pineapple, citrus, peach and nectarine, weaving in the malty aroma that is so typical of a tripel.

Ename Tripel makes for a great pairing with fried trout, mushrooms in a cream sauce and chocolate desserts.

This beer will keep in the bottle for 24 months, or on tap for 10 months. To keep this beer in an optimal drinking condition, you're recommended to store its small bottles upright, though the bigger 75cl ones are preferably laid down to rest.

An abbey-styled tripel like this will not improve any by keeping it longer than it says on the bottle cap. This is a beer best drunk at a young age, freshly brewed and fermented.

Besides being available in 33cl bottles and 20 litre kegs (and in distinction to the Ename Blond and Dubbel), the Tripel is also available in a larger 75cl version.

As with the other Ename and Roman beers, you will have no trouble getting hold of this beer via the classic channels in Belgium. Besides café's and specialised beer shops, you will often find supermarkets stocking this beer. 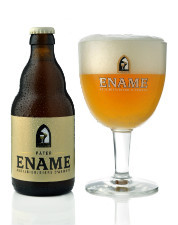