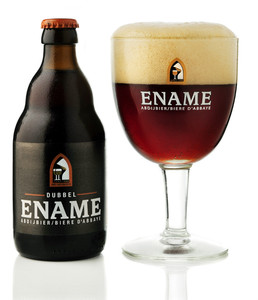 The official launch was held, with much ado, at the ruins of the abbey they are named after, Ename Abbey. Because of that connection, all 4 members of this family of beers are recognised Belgian Abbey beers.

The Roman family have been brewing Belgian speciality beer in the city of Oudenaarde, with considerable pride, for fourteen generations. Incredibly, the brewery started in 1545 and today they are mainly known for their Gentse Strop and Adriaen Brouwer beers.

But this abbey beer's story takes us even back further in history, more than a thousand years, to 843 AD. That was year that the original Treaty of Verdun was signed, which made the river Scheldt the natural border separating Flanders from the German Empire.

A fort was installed at Ename on the German side, to make sure that the Flemish troops, lead by the Count of Flanders, stayed on their side of the Scheldt.

When this defensive fort became obsolete, Benedictine monks moved in, and quickly converted the fort into an abbey, in 1063. And, as usually happened when monks moved-in in those times, it didn't take long before they started brewing beer. That continued for seven long centuries.

But as happened with many other abbey's in the region, Ename Abbey brewing ways ended when it was destroyed during the French Revolution. It was never rebuilt.

Its beers, however (or at least a modern-day interpretation of them) have been revived by the Brouwerij Roman. The Ename Dubbel is one such recreated abbey beer. It is a balanced beer, full in the mouth, zesty and fruity. Its sweet initial taste gradually gives way to a mild finish of hop bitters.

As with the other Ename beers, the Dubbel is brewed with water from the Brouwerij Roman well, malt, hops, candi-sugar, and their own in-house strain of yeast.

Ename Dubbel pours as a nice, clear beer, which is strong on colour: richly-dark and red-brown, topped by a stable, creamy and finely-meshed head (when properly served in a clean glass).

The Ename beers are served in a classic, branded chalice, one quite typical for such abbey beers.

On the nose, there are aromas of roast malt, caramel, coffee, dark chocolate, alcohol and caramelised fruits.

On the palate, Ename Dubbel has a sweetish taste, with the clear presence of caramel, as well as roast malt and hop bitters, which are also present in the – nicely dry – aftertaste.

This is a classic abbey-styled dubbel, with a dose of specialty malts and a warm, sweet taste.

This beer is ideal for use in the preparation of certain sorts Belgian dishes, especially one of nation's most iconic dishes: 'Stoverij/Carbonades Flamandes'.

This is a rather classic slow-cooked stew, made with beer-braised beef, one to be found on many menus across the country.

Keep your Ename Dubbel bottles upright, in a cool, dark and dry place. Bottles keep for 24 months, while on-tap the beer keeps for 10 months.

There's no need to store this beer for any longer than indicated by the brewer, though, as it will not undergo any positive evolution. And with nearly half a millennium of cumulative experience under their family belt, we tend to follow the brewer's advice on this one!

The Ename Dubbel, just as with the Blond and Tripel, is available both in 33cl bottles and in 20 litre kegs.

The beer is readily found in many Belgian supermarkets, as well as its specialised beer shops and beer café's. But also outside the country you'll certainly be able to lay your hands on this exported dubbel.

Ename Tripel
This abbey beer has roots deep in local history. Its origins go all the way back to the Treaty of Verdun, concluded in 843. This landmark agreement made the river Scheldt the designated border between Flanders and the German empir ...
[ read more ]

Ename Blond
1990 was an important year for Brouwerij Roman, as they launched a triumphant trio of abbey beers: Ename Blond, Dubbel and Tripel. The launch coincided with an open air spectacle held amongst the abbey ruins. The Ename Blond was, ...
[ read more ] 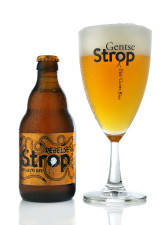 Rebelse Strop is served in the same elegant, branded, tulip-shaped glass with a long stem that is used for the Gentse Strop.... [ more ]