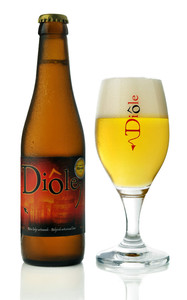 The Diôle Blonde was the first beer introduced by Brasserie des Carrières. Its launch at the end of 2012 came after much fine-tuning and many a test brew in this microbrewery at the Malterie du Château in Beloeil, where brewer Julien Slabbinck is also a quality manager.

This particular beer is brewed with the basic ingredients: water, home-produced yeast, Belgian hops farmed in-house and malt, without any further additions.

The beer’s name refers to a tool that was used for polishing marble in the local stone industry; the brewery itself is located between two former marble quarries.

This beer is a great example of the trend towards terroir beers in the south of Belgium. The brewers source their ingredients as locally as possible. The barley is grown in the local area and malted in the adjacent maltings according to the brewery’s own specifications.

At Brasserie des Carrières the mashing basin is heated using a gas flame. This causes the malt to caramelise slightly, which contributes to the characteristic taste.

Diôle Blonde has now been joined by a Diôle Ambrée and a Diôle Brune. To celebrate the annual hop picking, a harvest beer is produced, brewed with fresh hop cones and a new recipe every year.

Diôle Blonde is a top-fermented beer which re-ferments in the bottle.

Diôle Blonde is brewed using 100% natural ingredients: water, a house yeast, pils malts, Cascade Perle hops and two other hop varieties, some of which are grown on their own farm.

Diôle Blonde is copper-blonde beer with a slight pearlisation and a luxuriant white head of froth.

The slight pearlisation is caused by the ‘D’ at the bottom of the glass, around which bubbles are produced. Do make sure you use a perfectly clean glass to achieve a perfect foamy head.

Diôle Blonde is served in a voluminous wine glass that narrows at the top and rests on a tall stem. The ‘devil’s tail’ logo stands out clearly against the beer and is a jokey reference to those who empty their glass once too often as well as a nod to the quarrying industry.

This beer offers surprisingly fruity aromas of citrus fruits alongside refreshing impressions of hops. This fruitiness is also present in the taste, with its citrus and passion fruit notes and a hint of berry fruits.

The slight caramel touch is quite noticeable. Thanks to the re-fermentation, this beer contains few residual sugars making it very easily digestible.

Diôle Blonde makes an ideal summery aperitif and a great pairing with barbecued and roast meats. Don't be shy to experiment with this beer in the kitchen, it can for instance be used as cooking liquid, to be added when preparing one of Belgium's number one dishes; mussels, what else!

In Basècles, the brewery’s home town, the local butcher uses Diôle Blonde to finish off his artisan sausages, paté and ham.

This beer can be stored for up to two years in the bottle and for up to six months on tap (in kegs). As is usually the case with these light blonde beers, Diôle Blonde isn't suited to be kept for longer than advised by the brewer.

This beer leaves the brewery when it's ready to enjoy, always keep your bottles upright in a dry, dark and cool place.

Diôle Blonde is available in 33cl and 75cl bottles and on tap (20l and 30l). Being a microbrewery Brasserie des Carrières is a relatively small, but growing, player in the Belgian beer landscape.

Nevertheless, you will be able to get a hold of the Diôle beers outside of Belgium, online or locally at specialised beer café's and beer shops.

Naturally, when you travel the area around the brewery you will encounter quite a few businesses serving these artisan beers.

Diôle Ambrée
Amber beers are not as prevalent as they used to be. This type of top-fermented beer was the response of Belgian brewers to the foreign pils beers that flooded the market from the beginning of the 20th century. A contest was stag ...
[ read more ]

Diôle Brune
Many Belgian brewers who produce specialty beers will tend to offer two varieties that they swear by, a blonde beer and a dark or Christmas beer. The dark beer will have the fragrance and colour of roasted malt, with the occasiona ...
[ read more ] 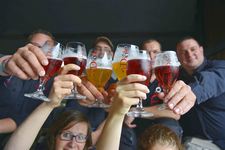 As with the majority of Belgian beers Diôle Ambrée is served in its own special glass. This one is an elegant high-stemmed glass adorned with the 'devil's tail'.... [ more ]