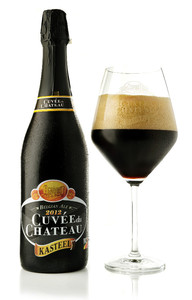 De Cuvée du Chateau is the crown jewel within the Kasteel range and has been brewed since 2010. It found its inspiration in the subterranean cellars of Ingelmunster Castle.

After ten years of maturation, bottles of Kasteel Donker started to acquire the taste of madeira and port. Brewmaster Hans aimed to achieve the same effect using a standard brewing process without the time it would take to mature. And thus the Cuvée saw the light.

This beer comes in small bottles (33cl) as well as in champagne bottles (75cl). Just like every other Cuvée it is date stamped. Xavier Van Honsebrouck has no doubt: this is a “Premier Cru Classé” among beers.

Cuvée du Chateau is a dark beer with a deep brown colour. If poured correctly it will yield a voluptuous frothy head which has almost the colour of mocha.

An exclusive beer deserves an exclusive glass. Thus, in addition to the characteristic Kasteel glass, a unique and appropriate degustation glass was designed especially for the Cuvée. As this glass is not that easy to find, the classic Kasteel glass will do fine.

The Cuvée is a lightly madedairised beer (slightly reminiscent of Madeira) with touches of both caramelised and roast malt, with a subtly bitter taste of the best English hops in the finish.

Cuvée du Chateau is a gastronomic beer through and through. It provides the perfect taste pairing with the more pungent, Belgian cheeses such as the 'Grevenbroecker' or Herve cheese.

We put this to the test by enjoying this beer paired with a classic steak in Roquefort sauce which proved to be a particularly successful combination.

This beer is also eminently suited for pairing with high cuisine dishes such as goose liver or calf sweetbreads.

As the taste of the Cuvée du Chateau is already based on the taste evolution of a 10-year old Kasteel Donker it would no doubt be an interesting experiment to follow this beer’s progression margin.

However, bear in mind that this beer was already created to let you enjoy a mature beer without the ten-year wait. So our advice is not to wait too long before drinking. It’s ready now.

This may be the most exclusive beer (after the Trignac) by Castle Brewery Van Honsebrouck's but it is still fairly easy to get hold of it.

You will find Cuvée du Chateau via resellers or in supermarkets, as will you be able to buy it at (online) specialized beer shops. Same as with the Trignac it is only available in bottles (75cl-33cl).

You also won’t have any problems being Cuvée du Chateau offered in some of the more beer orientated bars and cafés around Belgium.

As with many of Van Honsebrouck’s beers the Cuvée is exported and sold around the globe. 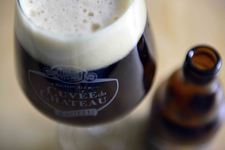