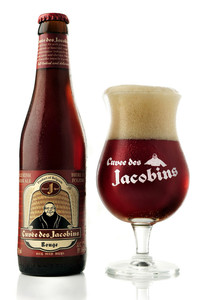 This truly is a unique beer, brewed the traditional way – and with much devotion and craftsmanship – by Brouwerij Omer Vander Ghinste . They are well-respected for their speciality beers, like the blond high-fermentation beer Omer (which has won international awards). Cuvée des Jacobins, by contrast, is an uncut lambiek that has matured for 18 months in oak barrels from France. That makes it a pure foederbier, and so something very special indeed.

Its name is unique too, and also has that French connection. It refers to the famous French Dominican abbey, the Hospice Saint Jacques, which lies on the Rue des Jacobins in Paris. Built in 1218, it offered hospitality to pilgrims on their way to Compostela – hence the monk featured on the label.

The monastery was also where the French revolutionaries held meetings after October 1789, when the new Government moved to Paris. An influential radical party was named after the monks who lived in the abbey – the Jacobins. They played a major role in the French Revolution, especially their best-known member, Robespierre.

Omer Rémi, the son of the brewery's founder (in other words, Omer II) stayed a short while in the Rue des Jacobins, during the First World War. It must have made an impression, because when he launched this beer in 1970, he decided to name it after this most-famous, and historical, of Parisian streets.

But it wasn't until recently that this beer was discovered outside of Belgium – particularly in the United States. It was there that many-a-beer-lover began singing its praises. Unsurprisingly, demand is now huge.

This beer is brewed with barley malts, hops, refined sugar and water. Naturally, in view of the fact that fermentation occurs spontaneously, no cultivated yeast cells are added.

As indicated by its name, this beer has a beautifully red-brown colour. It can be slightly clear or cloudy.

Such an elegant beer is best served in an elegant glass, such as Omer Vander Ghinste's proprietary glass, tailored for its Cuvée

This roodbruin beer has aromas of lactic acid and fruit (cherries or krieken) with a woody touch. It is a complex, but extremely well-balanced, sour beer with an after-taste of vanilla and red fruits. Quite a creamy mouth feel, too.

A perfect combination with Belgian grey shrimps. Paired with a fresh, young soft goat’s cheese, this slightly sour brew will also perform very well. This beer’s finesse and complexity will be lost, however, if it is used for cooking in recipes.

Beers of this type are the exception, rather than the rule, when it comes to storage. Like a geuze, you can readily store a Cuvée des Jacobins, for 10 to 20 years, or even longer – although its taste may undergo an evolution during storage.

This beer is available throughout the year, but that is dependent on stock levels. As it has a considerable maturation period, it cannot be reproduced as easily as other types of beer. And with the increasing demand and popularity of this beer, you may find it'll be out of stock at your chosen outlet, from time to time.

This beer is not as widely available from cafés as the other Bockor brews – such as the VanderGhinste Oud Bruin – but you are certain to find it in specialised stores. Like many other Belgian brewers, though, Bockor has a strong international presence, so you will be able to find this beer outside Belgium’s borders. 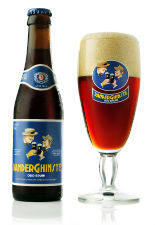 VanderGhinste Roodbruin has its own, brewery-designed glass. It is a traditional stemmed glass, with the original logo on the side, as is seen on the label.... [ more ]