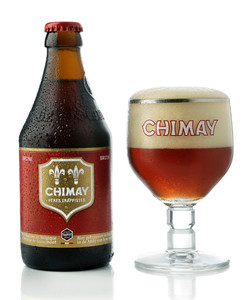 This is a beer with a pedigree. The Chimay Rouge was brewed for the very first time back in 1862, although it was a somewhat different beer back then. The biggest leap forward occurred after WWII. Like many other breweries, Chimay had suffered significantly during the 20th-century's wars. When the brewery was rebuilt, after the Second World War, everything was reconsidered, re-thought and re-drawn, with a view to tradition as well as the future.

One change was the format. In the beginning, the Rouge was only available in 75cl bottles. When the 1948 Easter bells inaugurated the Chimay Rouge, though, it came in a new 33cl format. One continuity was the flavour. While the taste undoubtedly evolved in its post-war rethink, this beer was remained inspired by the very first original recipes. And old ways die hard, it turns out – since 1978, the Rouge has been available again in 75cl bottles, which are lovingly monikered Première.

This dubbel is the lightest sibling amongst Chimay's heavyweight trio, and an ideal introduction for those who want to get to know Trappist beers. In that sense, the Rouge is the odd one out. Most Trappist and abbey beers start off with blond, then move from dubbel onto tripel or quadruple. But Chimay did things differently.

The ‘red’ does have less of a body than its ‘blue’ brother. But this copper-coloured beer does have a surprising fruitiness, along with touches of curaçao and coriander.The initial taste is sweet, while the dark malt holds in place the finishing touches of burnt chicory and toasted bread. So, as introductions go, the Rouge does a great job, educating the palate to the broader wonders of the Trappist universe.

The Chimay Rouge is a high fermentation beer that re-ferments in the bottle.

A handsome, dark copper colour that reminds you of falling leaves. The froth is off-white, and the Rouge presents the same yeasty veil as the tripel.

Chimay Rouge is poured into the traditional Chimay chalice, the typical shape for Trappist beers. Pay attention to the golden aureole surrounding the main body of the glass and the two rings on the stem. For pouring: tilt the glass slightly, pour the beer slowly but without interruption and make sure that the bottle is not touched by either the glass or the froth. Finally, stop before the bottle is empty – a 1cm layer of beer should be left in the bottle.

The fruity touches return in the nose, complemented by a smoky touch, brought to life by the Chimay house yeast. In the mouth, hints of liquorice will surprise you, rounded off as they are with the bitter hop aromas. This brown beer is amazingly easy to drink.

A delicious pairing with the Chimay Dorée crustless cheese. The fruity aromas of the beer, mingle with those of the cheese, to give a mouth feel of ripe plums. A plum chutney instantly springs to mind as the ideal companion for this cheese.

Best stored in a dark and cool room. The taste evolution depends on the recipient, and will be different according to the bottle size in which it is stored, or whether the beer is stored in barrels. At any rate, this beer is best drunk in advance of the best-before date.

In common with the Bleue and the Triple, the ‘capsule rouge’ is available in bottles of 33cl and 75cl. Chimay beers are easy to find, both in Belgium and abroad.

Chimay Dorée (Gold)
Father Théodore was responsible for the re-start of the Chimay brewery after the Second World War. He worked with Professor De Clerck of Louvain University. Together, they managed to isolate the Chimay yeast that is still in use a ...
[ read more ]

Chimay Triple (White Cap)
It was in 1966 that Brother Théodore created the ‘capsule blanche’, now better known under the name of Chimay Triple. In contrast to the dark Chimay Rouge and Chimay Bleue, the ‘white Chimay’ presents a dry and hoppy character. Th ...
[ read more ] 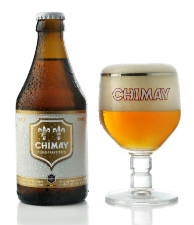 A Chimay is normally tasted from the well-known proprietary tulip-shaped glass, a design that is characteristic for all of the Belgian Trappists. This glass is available through be... [ more ]