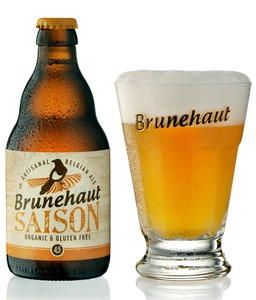 When Marc-Antoine De Mees became the new owner of Brasserie de Brunehaut in 2007, he decided to launch a range of organic beers – to be followed by gluten-free beers a few years later – to be marketed under the name of Brunehaut. The range is an addition to the traditional Saint-Martin abbey beers, for which the brewery had been known. These organic beers are brewed with natural ingredients that include locally farmed organic barley, malted in line with the brewer’s specifications. Brunehaut Saison completes the ranks of the other organic and gluten-free beers: Brunehaut Blanche, Brunehaut Blonde, Brunehaut Triple and Brunehaut Ambrée. Saison is a traditional farm beer from the Tournai-Mons area. It is a light, slightly tart, zesty and fruity beer. Under the law brewers were only allowed to brew saison until 29 March to prevent contamination from unwanted wild yeasts. Nowadays saisons can be produced throughout the year. The oldest sources date from the 17th century and refer to a spelt beer. Brunehaut Saison has a fine collar of froth thanks to its re-fermentation in the bottle. The aroma is fruity and the hop clearly makes its presence felt.

Brunehaut Saison is a top-fermented beer that re-ferments in the bottle.

The unfiltered saison takes on a golden-yellow colour in the glass underneath a firm, creamy, snowy-white collar.

Brunehaut Saison is served in a robust ‘retro’ glass with a wide rim. The glass depicts the church of the village of Rongy in splendid white, a reference to the ‘terroir’ of this beer and brewery.

This saison is characterised by its fruity, slightly malty aromas. The beer tastes full in the mouth with malty impressions and a restrained but lingering bitterness. A true thirst-quencher.

Brunehaut Saison can be stored in the bottle for one year.

Saint-Martin Triple
The Saint-Martin abbey beers are heirs to the former Abbey of Saint-Martin in Doornik (Tournai), one of the oldest cities in Belgium. The abbey was founded many centuries ago and ceased to exist in 1797, during the time of the Fre ...
[ read more ] 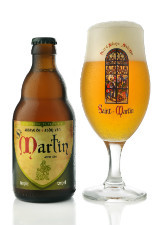 This degustation beer is served in an elegant, tulip-shaped glass with a tall stem. The glass is adorned with the image of an original leaded window from Doornik Cathedral that sho... [ more ]