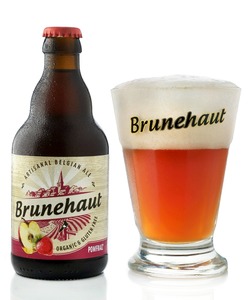 When Marc-Antoine De Mees took over the Brasserie de Brunehaut in 2007, he decided to start brewing a range of organic – and later on also gluten-free – beers that would carry the name of Brunehaut and complement the traditional Saint-Martin abbey beers for which this brewery had been renowned for centuries.

These organic beers are brewed with natural ingredients, including organic barley harvested from the fields of this brewery-farm and malted according to the brewer’s specifications.

This latest addition to the Brunehaut family is a light, natural, gluten-free, unsweetened fruit beer brewed on a base of Brunehaut Blanche white beer and re-fermented with the juice of strawberries and apples.

The beer was launched, to great acclaim, at a village fair in 2014. Brunehaut Pomfraiz is an ode to the tradition of fruit growing that is typical of the brewery’s home region.

The mother beer, Brunehaut Blanche, is brewed with malted barley and buckwheat, coriander, star anise and peel from both sweet and bitter oranges.

Brunehaut Pomfraiz is a refreshing thirst-quencher, celebrating a successful marriage between beer and fruit.

Brunehaut Pomfraiz is a top-fermented beer that re-ferments in the bottle.

Brunehaut Pomfraiz is brewed on a base of Brunehaut Blanche, which is made using water, yeast, pale malt, Hallertau Mittelfrüh hops, star anise, coriander, sweet and bitter orange peel.

The juice from strawberries and apples are added during re-fermentation.

Brunehaut Pomfraiz is a naturally pinkish-red, unfiltered beer with delicate pearlisation and a slightly cloudy appearance underneath a sturdy head of white froth.

For optimal pouring result always use a nice, clean and hand washed glass.

Brunehaut Pomfraiz is served in a robust, thick-rimmed ‘retro’ glass. The glass carries a snowy-white picture of Rongy village church, a homage to the terroir to which this beer belongs.

First taste impressions include the fresh and floral touches of the Brunehaut Blanche mother beer, enriched with aromas of strawberry.

The hop bitterness comes through in the background.

This unsweetened fruit beer is a refreshing thirst-quencher. At the re-fermentation stage the yeast is fed by the addition of natural juices of strawberry and apple.

Unsweetened fruit beers like the Brunehaut Pomfraiz make a good pairing with desserts containing chocolate or served with a chocolate sauce, ice cream or sorbet.

They go equally well with a rabbit stew where they provide a refreshing touch.

Light fruit beers like this Pomfraiz were never conceived to be kept and are brewed to enjoy right away; the beer comes to market when it is ready to drink.

The Brunehaut Pomfraiz can be stored in the bottle for one year; always store your bottles vertically in a dry, dark and cool place.

Brunehaut Pomfraiz is only available in 33cl bottles.

Brewery Brunehaut is active on the export market so you should be able to get hold of some outside Belgium.

Locally you can look out for the beer via the usual chains of distribution, whether it be supermarkets, specialised beer shops or cafés. 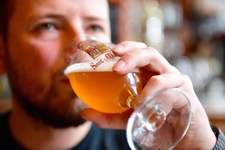 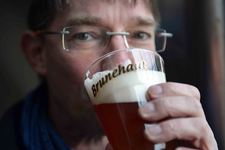 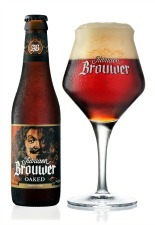