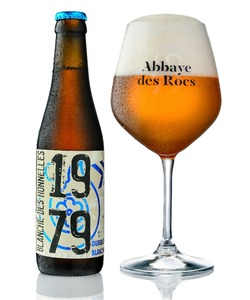 Witbiers, or white beers, are unfiltered, top-fermented beers. This traditional style was re-introduced in the 1960s by Pierre Celis, known for his Hoegaarden white beer and Celis White in the USA, where he moved after selling his business in Belgium.

Belgian white beer is traditionally flavoured with coriander and orange peel, which help account for its refreshing aroma.

Blanche des Honnelles is a cloudy, thirst-quenching beer with a pleasantly mild taste and a slightly sour touch – this is a beer to be enjoyed on a terrace when the sun is out.

It takes pride of place in the standard range of Brasserie de l’Abbaye des Rocs, which also produces Abbaye des Rocs and Montagnarde.

The name is a clear indication of its local origins. Honnelles is named after two small rivers: the Grande Honnelle and Petite Honnelle.

The smaller of the two flows gently by the historic watermill in the grounds owned by brewer, Nathalie Eloir.

The brewing water is drawn from an underground well.

The judicious use of herbs is typical for this brewery, and, like all of its beers, this one re-ferments in the bottle.

This unfiltered beer takes on a pale yellow colour in the glass, is cloudy in appearance and produces tiny bubbles below a frothy, white head.

Blanche des Honnelles is served in a contemporary, tapered, tulip-shaped glass on a tall stem. This produces an impressive collar of froth and preserves the beer’s aromas to the full.

Before drinking you will catch aromas of malt, hops and caramel.

The taste is malty and mildly sweet, with a slightly sweet, caramel-like finish.

Blanche des Honnelles is less bitter and sour than the classic white beers or wheat beers.

Try Blanche des Honnelles with a carpaccio of a white fish like cod. It goes well with hard cheeses with slightly sour touches.

It stands up to spicy tastes like pepperoni pizza and zesty Indian curries.

The recommended best-before date is 12 months in the bottle and 6 months on tap.

As far ageing goes, the general rule stands on this one... don't keep it longer than advised.

Blanche des Honnelles is available in 33cl and 75cl bottles and on tap (30l keg).

Abbaye des Rocs was one of the first microbreweries in Belgium, after several decades they have made their way outside of Belgium by now. You will able to find their beers via the usual and unusual channels!

Abbaye des Rocs
Abbaye des Rocs was the first beer from the Hainaut brewery of the same name. And when Jean-Pierre Eloir started brewing there in 1979 he was making Belgian beer history at the first ‘new wave’ microbrewery in the country. Abbaye ...
[ read more ] 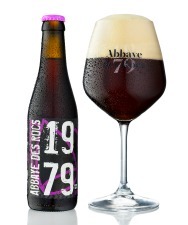 Abbaye des Rocs is served in a contemporary, tapered, tulip-shaped glass on a tall stem. It produces a fine head of froth and preserves the beer’s aromas to the full.... [ more ]