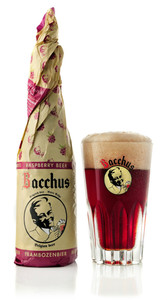 Bacchus Frambozenbier (Framboise) is similar to Bacchus Kriekenbier as the base for both fruit beers is Bacchus Oud Vlaams Bruin. Fresh raspberries are added to the beer which will continue to mature before leaving the brewery.

However, the basic Oud Vlaams Bruin beer type used in the production of this beer is nowadays almost as rare as lambiek from the Pajottenland region.

In common with all beers from the Bacchus range, this beer comes in 37.5cl bottles and is hand-wrapped in a paper covering. The Bacchus Frambozenbier is characteristic for West Flanders and, just like the Kriekenbier, it is an officially accredited regional product from West Flanders.

In addition to these natural basic ingredients, raspberries are added to the beer before its next maturation stage so the aromas will be allowed to mingle.

Bacchus Frambozen is served in the same glass used for Bacchus Oud Bruin and Bacchus Kriekenbier. A genuine, top of the range vintage inspired glass that makes for easy drinking and perfect handling.

A beautifully well balanced beer, with a perfect marriage of sweet and sour. It is zesty, refreshing and thirst quenching. The moment you pour, you will smell the raspberries.

Your nose will instantly fill up with fruity aromas. In the mouth the tastes of raspberries and balsamic vinegar melt into one.

The main taste is very sweet. An almond aroma surfaces in the aftertaste. A very special beer that is popular with lovers of sweet fruit beer.

Just like the Bacchus Oud Vlaams Bruin and Bacchus Kriekenbier, the brewery’s Frambozenbier was not designed to be a gastronomic or culinary beer. It is very moreish.

However, the beer is perfect for use in a number of dessert recipes, a sabayon for example.

A great choice of dessert beer to accompany sweet dishes, or just to have on its own. The pronounced taste of raspberries does not make it an obvious candidate for food pairing. If you do accept the challenge, please be careful.

Bacchus Frambozenbier can be stored for a short while under cool, dry and dark conditions. The taste will evolve, which may appeal to certain beer lovers.

Up to you to experiment and find out.

In common with other Bacchus branded beers, this brew is slightly more difficult to get hold of in supermarkets than the more well known Kasteel range.

After all, there is quite a big difference in the volume of beer produced annually between these two ranges.

Castle Brewery Van Honsebrouck exports its beers around the globe so Bacchus Frambozenbier can be obtained far and wide.

You may need to try resellers or specialised (online) retailers. In Belgium, the better beer retailers and beer cafés should be your first port of call.

Kasteel Blond
Kasteel Blond is a real thirst quencher. A refreshing, characteristic blond Belgian beer with a 'relatively' low alcohol content, especially in comparison with the average alcohol content of some of the other beers in the “Kastee ...
[ read more ] 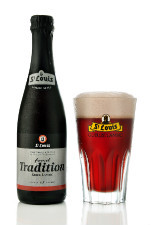 St Louis Kriek Fond Tradition is served in a traditional, robust, ridged branded glass, not dissimilar to the glass used for Bacchus.... [ more ]