On the principle that it’s better to be safe than sorry, mankind has always looked to higher powers to safeguard his precious beers. In the West simply praying wasn't 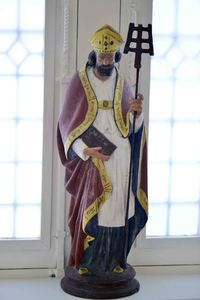 Sint Arnoldus - Saint Arnold
© BeerTourism.com
enough so that means there’s a whole bar full of Christian saints somewhere all of whom have been declared patrons of brewers and brewing.

Among them are Augustine of Hippo, Luke the Apostle, Arnold of Metz, Good King Wenceslas and Nicholas of Myra, better known as Saint Nicholas or Father Christmas.

The two most revered and popular 'saints' in Belgium are, without doubt, King Gambrinus or Jan Primus, Duke of Brabant as well as Saint Arnold or 'Sint Arnoldus'. You will have a hard time finding a Belgian brewery that doesn't have a statue of Saint Arnold sitting around somewhere; again, one is better safe than sorry.

Even today religion has its influences on beer and brewing with the whole world revering Trappist beers as Orval and Sint-Sixtus as if they we're fluids secreted by the saints themselves. Many beers in Belgium are also named after saints, (beer or non-beer related) abbeys, monasteries or biblical figures, the list is near to endless. Find out more about beer and monks, religion and paganism on our History of Beer page.

When The Saints Go Marching In

Saint Augustine of Hippo was born in 354 when Hippo was part of Tunisia. In his early years he was a bit of a tearaway, known for his wild living and a more than healthy interest in alcohol. He subsequently saw the light 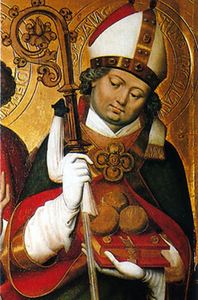 Nicholas of Myra
© BeerTourism.com
and until his death at the age of 76, he lived a very holy and healthy life.

But his early love for a good beer was enough for brewers to seek his blessing when they needed a patron saint.

Others chose Nicholas of Myra. Myra is in Turkey and Nicholas is believed to have lived there in the first half of the 4th Century. Legend has it that three pilgrims stopped at an inn for the night, where their host killed them before making off with their money.

Nicholas, in disguise, asked for God’s help to resurrect them and as a result he became seen as the protector of travellers and brewers, presumably because all the action took place at a tavern.

Since the 15th Century Nicholas of Myra has also been celebrated by children in both Holland and Belgium in a way that has nothing to do with beer. 'Sinterklaas' in Dutch or 'Saint Nicolas' in French is an annual feast held the 6th of December where children that have been good all year are rewarded with sweets and toys...The same goes for Father Christmas in the Anglo-Saxon world (Saint Nick!), who's legend was also derived from Nicholas of Myra. Saint Luke is another candidate for the role of patron saint of brewers, despite there being very little evidence to 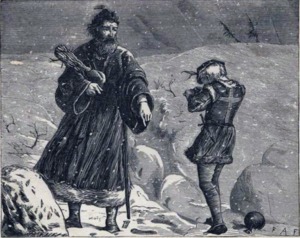 Good King Wenceslas
© BeerTourism.com
link him with the trade. It may simply be that medieval monks drank beer because of the terrible state of water in the middle ages, something that Luke, as a physician, would have been able to confirm.

Wenceslas (the Good King of the Christmas carol) was born in Czechoslovakia in 907 and endeared himself to local hop growers and brewers by instituting a death penalty for anyone caught exporting Bohemian hops.

He was subsequently assassinated by rivals, in a completely un-beer-related attack, when he was only in his late 20s or early 30s. As the man responsible for the spread of Christianity in his country he was made the patron saint of both Bohemia and Czechoslovakia and, by extension, of Czech brewers.

Saint Arnold of Metz was another great believer of the superiority of beer over water, believing that polluted water caused illness and that beer was a much better bet. He was born in 580 and according to one legend 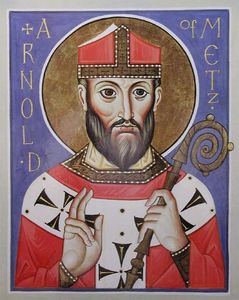 Arnold of Metz
© BeerTourism.com
stopped an outbreak of plague by submerging his crucifix in a brew kettle and telling the locals to drink only from that.

Our next saint, Arnold of Soissons is often confused with Arnold of Metz and many of the same miracles are attributed to both men.

This Arnold’s beery miracle came after the brewery roof at a Flanders abbey collapsed. Saint Arnold of Soissons prayed to God to multiply the stores of beer left and when God obliged, the locals instantly declared him a saint.

He’s also credited with discovering that the straw cones used in bee hives could be used as a filter in the brewing process to produce an even clearer brew. As a result, he’s often portrayed surrounded by bees and with one hand resting on a bee hive. Arnold preached in the Brabant region of Belgium, back then the nation’s hop growing heartland, and as a result is also the patron saint of hop-pickers.

Interestingly when a princess from Brabant married a Kentish prince part of the dowry was land close to the Affligem brewery in Brabant. As a result, hops were taken to Kent, introducing the plant to Britain’s most famous hop growing region.

Plenty of other saints have been called into service as patrons of brewing. These include Saint Barbara, Saint Medard of Noyon and Saint Adrian, who is widely recognised throughout Europe as a patron saint of beer. 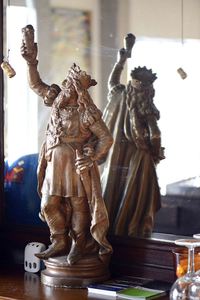 Yet another is King Gambrinus, known to his close friends as the 'King of Beer' and together with Saint Arnoldus is a 'big shot' among beer patron saints. Again, he is not recognised in any church listings, but he is credited with having invented hopped malt beer.

'Gambrinus' is believed to be derived from the latin 'Jan Primus' also known as Jan I, Duke of Brabant, who lived from 1252/54-1294. It is thought by many that his remains were buried underneath what is now the old Brussels stock-exchange and soon to be Brussels Beer Temple.

Saint Brigit, after Saint Patrick the second of the Irish saints, is remembered as a generous beer-loving woman. One typical story tells of her time working in a leper colony. The lepers implored her for beer but she had none, so she blessed her dirty bath water which miraculously turned into an excellent beer. She’s said to have regularly repeated the trick when visiting priests needed their whistles whetting.

The Brussels library has a poem attributed to Brigit that includes the lines: “I should like a great lake of ale for the King of Kings. I should like the family of Heaven to be drinking it through time eternal.”

Detailed information about the Belgian Family Brewers (BFB); 21 Belgian breweries that have been brewing for over fifty years in the same family.[ more... ]

The Petrus family from Brouwerij De Brabandere unveils a world of aromas and flavours. Petrus Blond is a classic from a Petrus Tradition range that also includes the Dubbel and Tri... [ more ]